Team NLR / DME came out swinging at the Velocity Spring Bike Open at Rockingham Dragway on March 24th-25th. Dimey Eddinger and Andy Sawyer of DME Racing in Winston Salem, North Carolina had a busy winter building new bikes for the 2007 season for their customers and had to put their own Pro Sportbike on the back burner so they could take care of their customers first. As the first MIROCK event approached, they retro-fitted their Pro Sportbike with new bodywork from Catalyst Racing and a new paint job from former Outlaw Pro Street Racer Craig Hartless. The team also has a new engine program with Cooper Performance. Cooper Performance has a track record that speaks for itself.

They are the exclusive engine builder and cylinder head specialist for NLR Turbo Systems and that in itself says alot. Sebastian Doming of NLR says ” I only use what I feel is the best for our bikes and our customer’s bikes and Cooper Performance has proven themselves time after time with me. Jerry and Jeff of Cooper Performance have built every Brute Horsepower Engine that we have used in competition (we have never lost), as well as our race bike engines and let me tell ya, when it comes to making big, reliable, power these guys are the only choice for us. I put these motors through their paces when trying to produce maximum power at sustained boost levels and it doesn’t do me any good if something is missed. I know every engine/ head we get back will be at its peak potential which makes my job easy. ” The NLR / DME Chassis Pro Sportbike uses a Cooper Performance cylinder head this year and I think the ET and MPH speaks for itself! 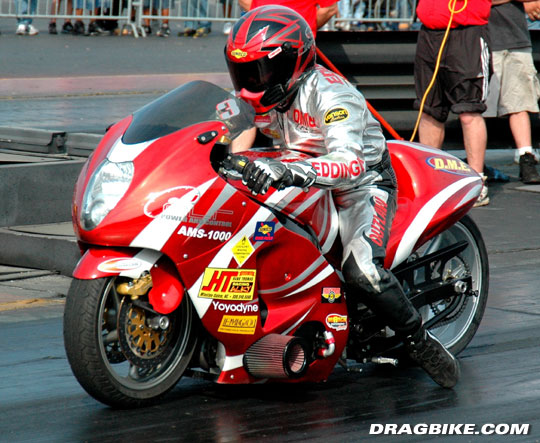 Dimey Eddinger on the quickest Pro Sportbike of the event 7.73!

Eddinger and Sawyer worked countless late hours getting the ready bike for the first event, and didn’t even fire the engine for the first time until the early a.m on Saturday morning at their shop, and their shop is still 2 hours away from Rockingham Dragway. They loaded the bike up and headed to the ROCK at 5am and drove right to the gates with no sleep at all. 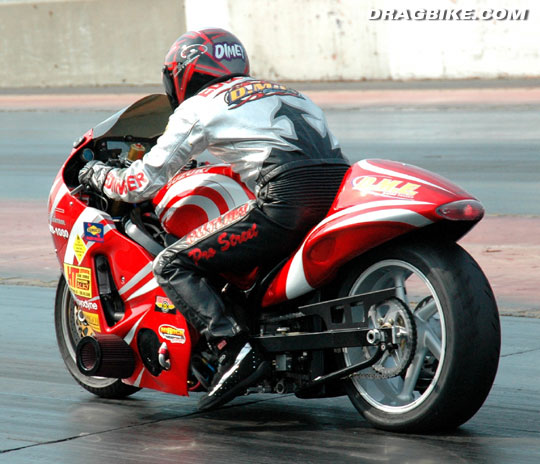 During Saturday’s shakedown runs and qualifying sessions Eddinger’s bike was plagued with suspension problems. “The bike was just spinning through the 60′ and the entire 1st gear all day”, stated Andy Sawyer. The team tried different shocks, spring rates and other adjustments to get traction under control. The bike could only muster high 1.4 60’s and was still running 8.0s at nearly 190mph. The team then entered their bike into the Afterdark Underground grudge session for some more track time and had to come up with some new boost tune-ups to correct the problem. “The new Cooper Performance motor was making so much power that it threw our previous tune-ups off” said Eddinger.The team’s crew chief Andy Sawyer said, “I knew what my DME chassis needed with the increase in power and we utilized the control capability that only the AMS-1000 posses to get the results that we needed. We also made some small adjustments to the MTC Multistage clutch and got their 60′ times back down to a 1.33 where Eddinger likes to be. The power up top was glued all weekend thanks to the wide Marvic rear 6.75 rear drag wheel from Yoyodyne that propelled the bike to 190mph! And of course the Brembo brakes got the bike stopped with ease.” 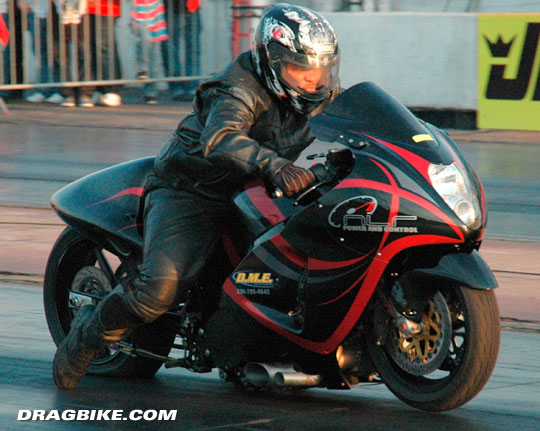 The team came out Sunday morning with their guns blazing again, netting 7-second time slips and set low ET of every round in eliminations! First round, Eddinger faced off against Anthony Smith and Eddinger cut an amazing .011 reaction time and lit up the scoreboard with the only 7-second pass of 1st round with a 7.98 @ 190.08 mph for the win. During second round Eddinger was lined up against John O’ Conner and O’Conner was out first with a .070 reaction time, but Eddinger was coming on strong with that Cooper Performance power and took the win light with a 7.90 @ 188.60 mph, which was also the only 7-second pass of 2nd round. In the semi-final fellow NLR rider Anthony Stewart was paired to run Eddinger. Their was a lot of friendly smack talk between the two leading up to this race and both Stewart and Eddinger went to work on their AMS-1000 boost controllers for their edge. The two staged their bikes and Eddinger was out of the hole first with a .081 reaction time to Stewart’s .187, and the two bikes were on a mission! Eddinger crossed the strip first with an amazing 7.739 (quickest pass of the event), and in the other lane Anthony Stewart lit up the scoreboard with a 7.822 @ 180.96mph! 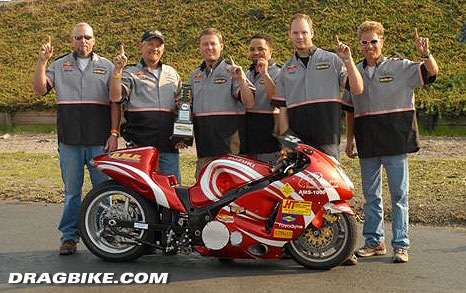 Dimey Eddinger took the win and is now #1 in the points chase.This was Anthony Stewarts first 7-second pass and he did it in style, skipping the 7.90s altogether, and he almost skipped the 7.80s too! It was a great riding job done by both NLR riders. In the final it was the classic NLR vs Velocity final, and Team NLR wouldn’t have it any other way. Eddinger was set to face Shaun Roles, and Roles had the reaction time advantage with a .042 light to Eddinger’s .104 light, but Eddinger got over agressive with the clutch and threw the bike into a bog, yet the Cooper Performance motor came through and took Eddinger to the stripe first with a 8.034 @ 187.39mph to Roles’ 8.354 @ 182.28mph. The 2007 season started the same way the 2006 ended with NLR in the winner circle…. but this time there is a new sheriff in town, and his name is Dimey Eddinger, and he is out for another helping of the Velocity Racing Buffet.