Teasley’s Street Bike Charges by the Bar Bikes at NHDRO

Jeremy Teasley is hands down one of motorcycle drag racing’s most versatile and respected jockeys. Coming into the 2017 season Jeremy had 13 class championships, a Dragbike.com BAMF Title, and more event wins then we can keep track of. At the age of 26 Jeremy Teasley is someone that many racers admire and fear.

On any given weekend Jeremy will be running Pro classes like Pro Street and Real Street, then switching over to a street bike for index classes, while also jumping on a grudge bike or two. He has even had his hand in NHRA’s Pro Stock Motorcycle class. In one weekend we have seen him ride 7 different motorcycles! His talent and skills are hard to match. 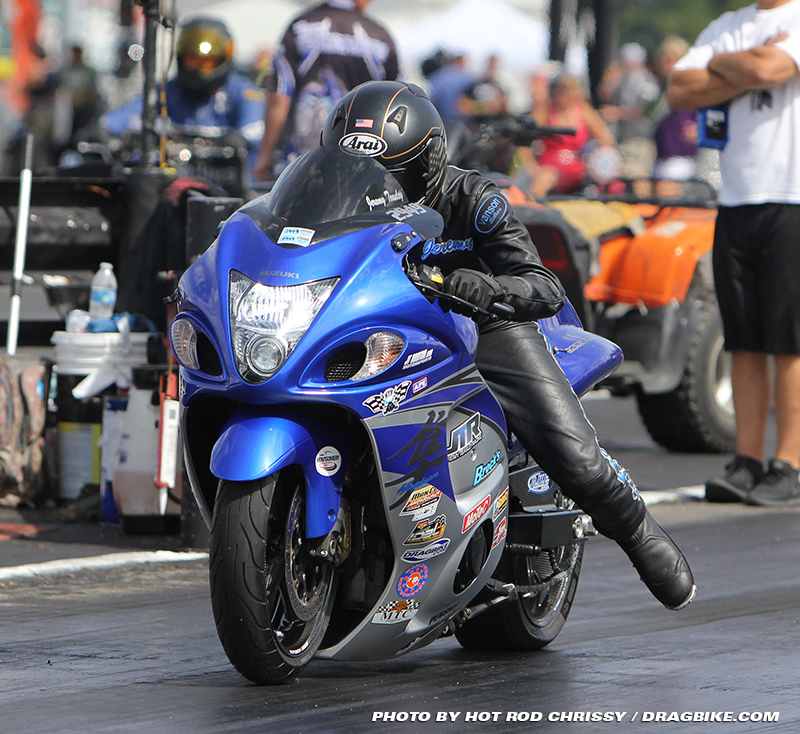 With all the classes that Jeremy runs, the Top Gas class is one he had his eye on this year for a championship.

Top Gas is a 8.20 Index class that was originally designed for wheelie bar bikes. In 2006 AMA Prostar amended the Top Gas rules to allow bikes without wheelie bars to enter the class. This rule change came into effect to accommodate Jason Miller’s MIROCK Outlaw class. This rule change gave those bikes a class to run in at the Prostar events. That rule originally required that non-wheelie bar bikes have a minimum of 74” of wheelbase. Since 2006 the class has evolved and the minimum wheelbase rule has disappeared. Thus, allowing production motorcycles to flood the class.

Even with the allowance of street bikes, wheelie bar bikes continued to dominate the winner’s circle for years. In 2015 we saw a shift in the Top Gas landscape. Alex Hughes took the Top Gas championship with the SDBA series with a win and a #1 qualifier at every event that year.

And in that same year NHDRO saw its first all street bike Top Gas final between Jeremy Teasley and Ben Knight at their Gateway International Raceway event. Both riders wanted that first Top Gas win, but when it came down to the wire Jeremy took the stripe on Ben running a 8.282 to Knight’s 8.293. 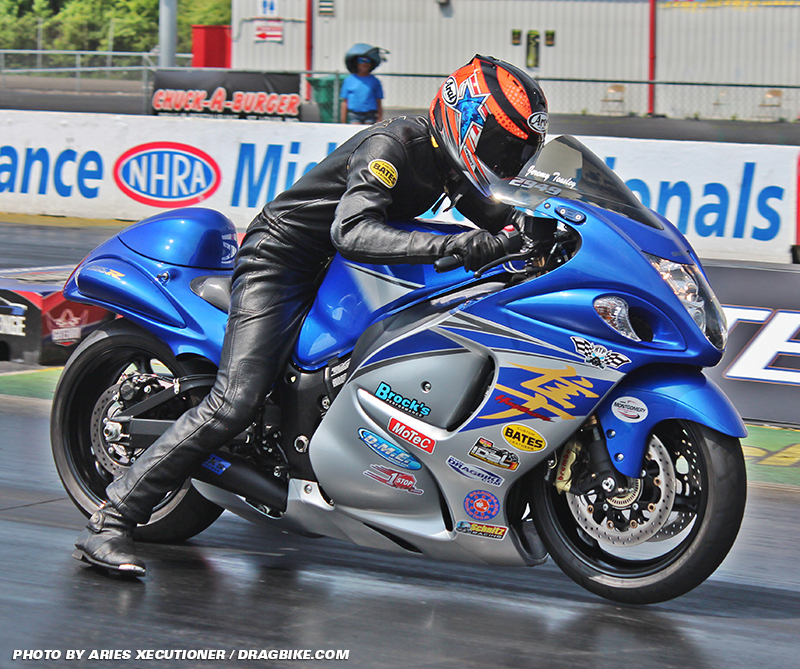 Jeremy took that win and from that moment on we knew a Top Gas championship was on the horizon. In 2016 Jeremy missed half of the NHDRO season but still managed to finish 7th in points with a win and runner-up that season. 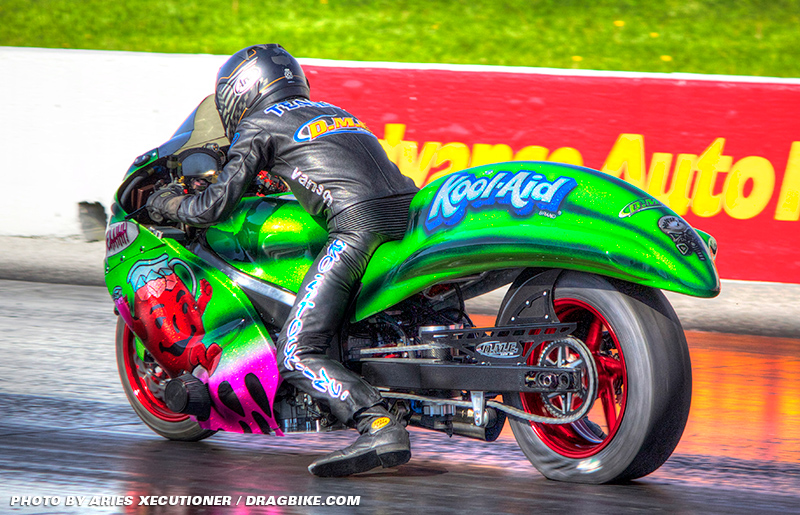 With the 2016 season finally behind him, Teasley started the 2017 season on top with the announcement that he would be riding for the DME Racing/Pro-Stock Inc Pro Street team. 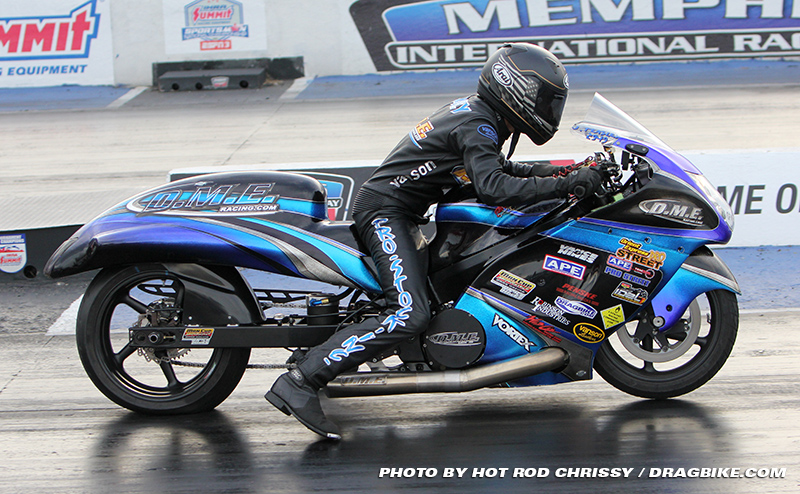 Even with the team responsibilities Jeremy has continued to run sportsman and grudge events and can typically be found at the race track on any given weekend and in the winner circle. Jeremy took a win in Super Comp, the 8.90 bar bike class, at Rockingham Dragway last month for the Man Cup event showing his diversity. 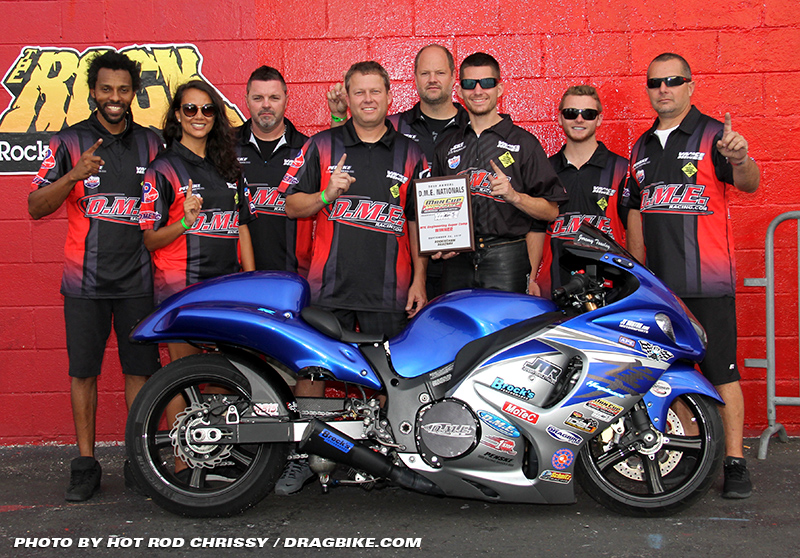 After that event Teasley headed back to Indianapolis for the final NHDRO race of the season. Jeremy had a battle ahead of him against Bradley Shellhaas and his bar bike. Shellhaas had a 65 point lead on Teasley going into the final event, and there were still two events to complete. On Saturday, the Summer Celebration race was contested and gave Jeremy his first chance to gain points. Jeremy met Shellhaas in round 3 and took the much-needed win over him to give himself the fighting chance he needed at the championship. With Bradley out, Jeremy was determined for a win that night. Despite making it to the final, Jeremy would not be able to declare a victory over competitor Jeremy England. Teasley cut his worst light of the day allowing England to squeeze by him for the victory. 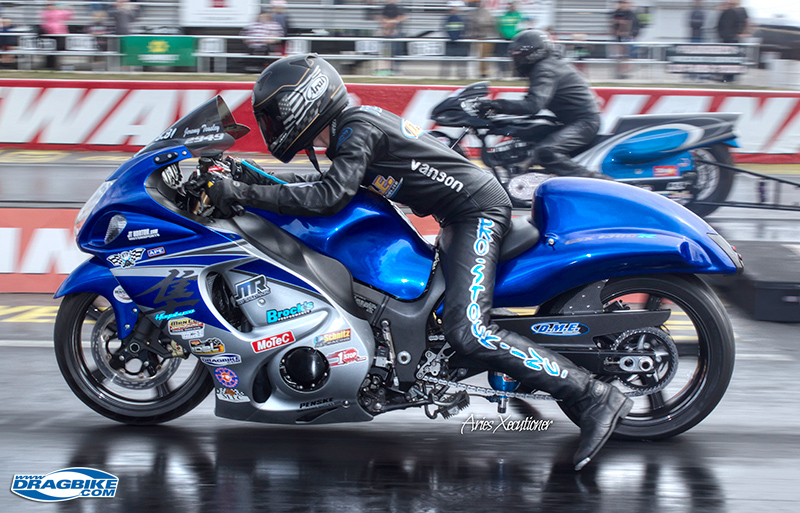 Despite the loss, Teasley and his team were unshaken. Shellhaas now only carried an 11 point lead over Teasley going into Sunday. Jeremy just needed to stay one round ahead of him if he wanted to win the championship. In round one Kevin Adams on his 2008 Hayabusa street bike took out Bradley Shellhaas while Teasley took a first-round win. Jeremy knew he had the championship wrapped at this point, but stayed focused on an event win. Jeremy took two more round wins before falling to Kevin Adams in the semi-final. Adams went on to win the event and put another notch on the board for the street bikes. 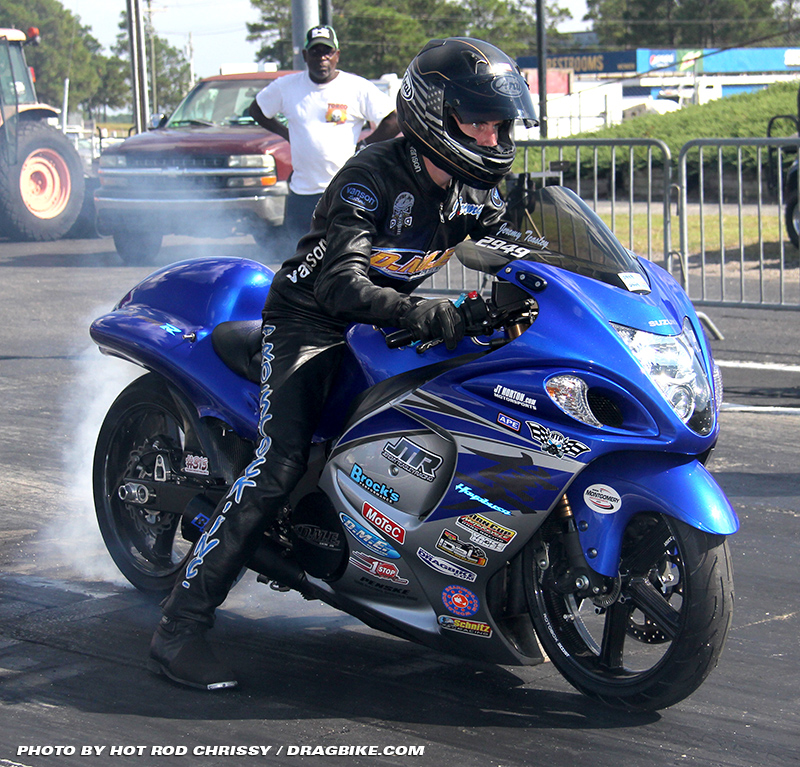 It was an exciting moment at Indy when we knew Jeremy had taken the first NHDRO Top Gas championship on his 2015 Suzuki Hayabusa street bike. Jeremy has a slew of championships and records to his name, but being the first to get there, is always an accomplishment that can’t be outdone. 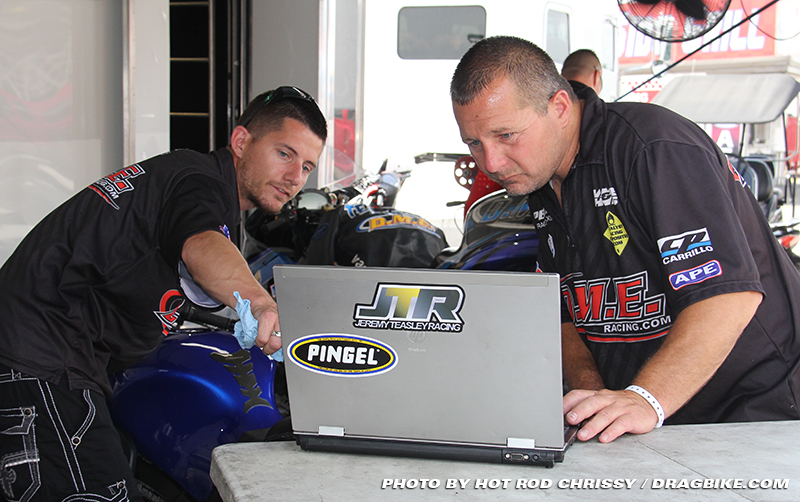 Jeremy now gets to add this Championship to his list of ‘Firsts’: The landscape of racing has been changing since the speed of production bikes can now rival most purpose-built motorcycles at the race track. And with a good clutch hand, anything is possible.

Congratulations to Jeremy on his Top Gas Championship! 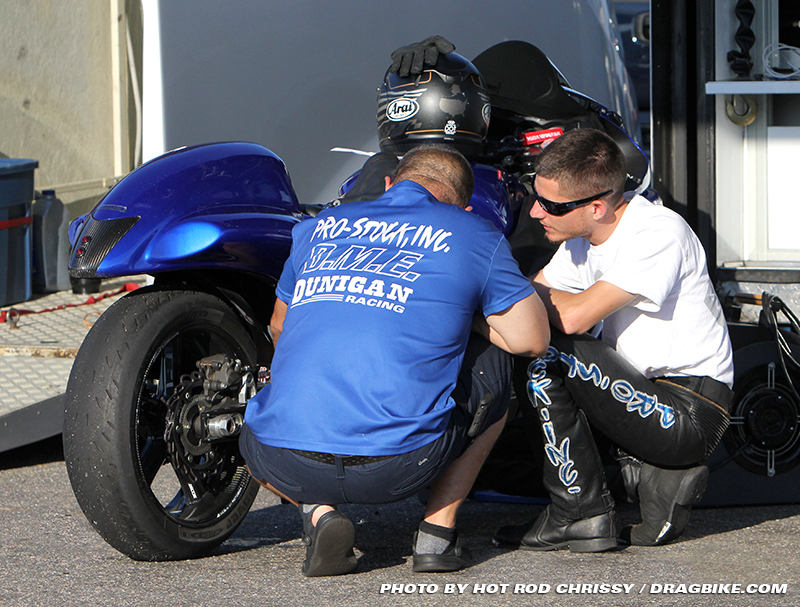