DME Racing to Expand Capacity by Relocating to Mocksville 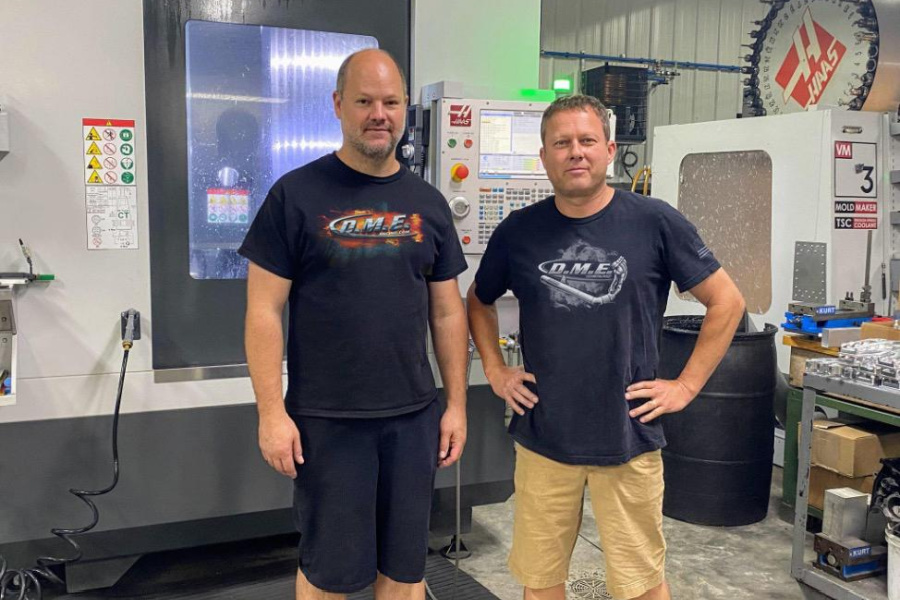 (L to R) Andy Sawyer and Dimey Eddinger, owners of DME Racing, with their HAAS 5-axis machine, which they use to create custom parts they design in-house.

More Than 20 Years of Excellence

Over the past 20 years, that commitment has propelled DME Racing from a part-time passion into a full-time profession. The company now employs 13 and manufactures and ships premium motorcycle parts worldwide. 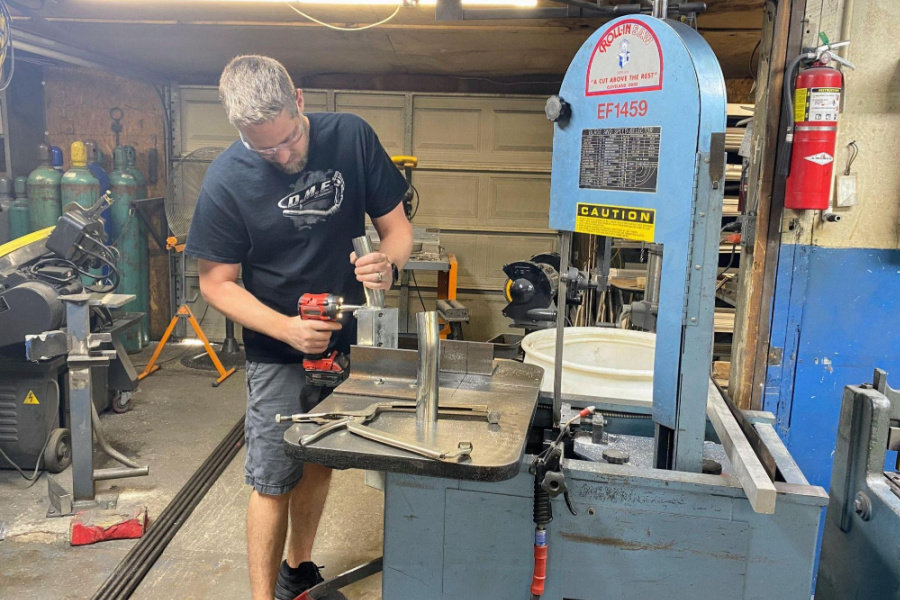 Jeremy Lynch is fabricating a custom fuel cell that will be fitted onto a motorcycle for drag racing.

With growth came the need for more space, however, the company found its 6,000 SF facility in Winston-Salem landlocked by zoning restrictions. Eddinger lives in Davie County, so after a two-year battle, he turned to Terry Bralley, president of the Davie County Economic Development Commission, who was happy to help.

With Bralley’s assistance, the company purchased 13 acres at the corner of Bethel Church and Milling Road in Mocksville to build a 15,000 SF facility with plenty of space for manufacturing, a showroom, and future growth. Factoring in supply chain delays, Eddinger expects to be in the new facility in 12 to 18 months. 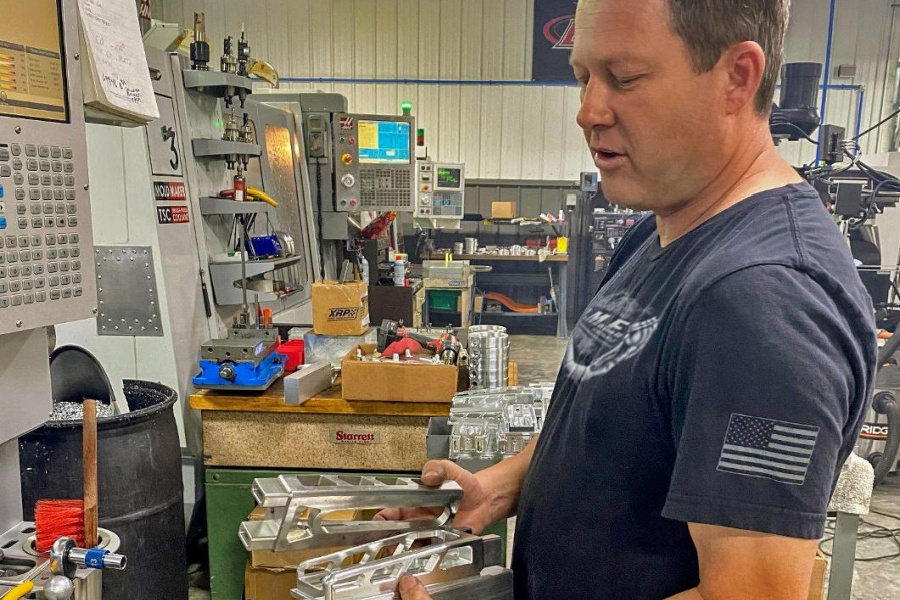 Eddinger explains how they take a block of aluminum and sculpt it into a performance part for a motorcycle.

DME Racing adds another feather to Davie County’s cap. “We are extremely excited to welcome DME racing to our community. Racing today is an extremely high tech sport and requires a highly skilled workforce,” said Bralley.

It’s a bittersweet move for Eddinger, who’s spent practically every day of his life at 2260 Old Salisbury Road. The building has been in his family since 1932, first as his grandfather’s service station and then his father’s motorcycle shop. He grew up working with his father, Mickey Eddinger, owner of Wheels by Mickey, building and repairing motorcycles. So, it was only natural that when they needed custom parts for his drag racing bike, he and his dad would craft them themselves. Other racers began requesting parts, and DME Racing was born. 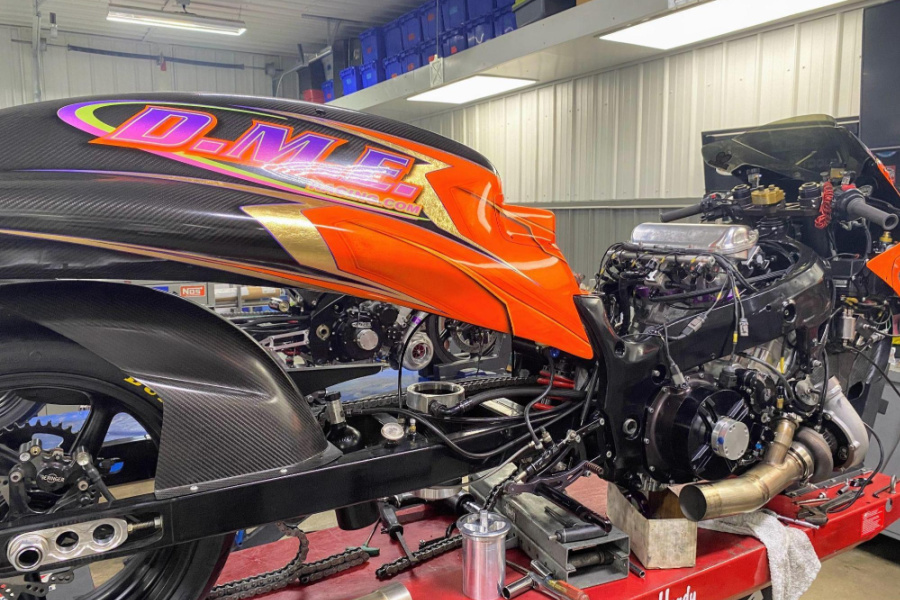 DME Racing builds its drag racing team’s motorcycles from the ground up with products they design and create in-house.

He worked a full-time job and built motorcycle parts at night for five years before the business could sustain him. “I tell my kids, if you get up in the morning and can’t wait to get to work, then you are doing what you are meant to do, and if you put your all into it, success will come.”

Promising “quality performance products built by racers for racers,” the company produces standard and custom parts such as exhaust systems, frames, and swingarms for a wide range of motorcycles. With an emphasis on motorcycle drag racing, DME Racing employs a group of talented fabricators that create custom one-of-a-kind components every week built to their customer’s specifications. Eddinger explained that all parts are made from scratch with quality materials. “We can pretty much make anything as far as fabricating and welding steel and aluminum. We take great pride in our company, our commitment to customer service, and in the products we sell.” 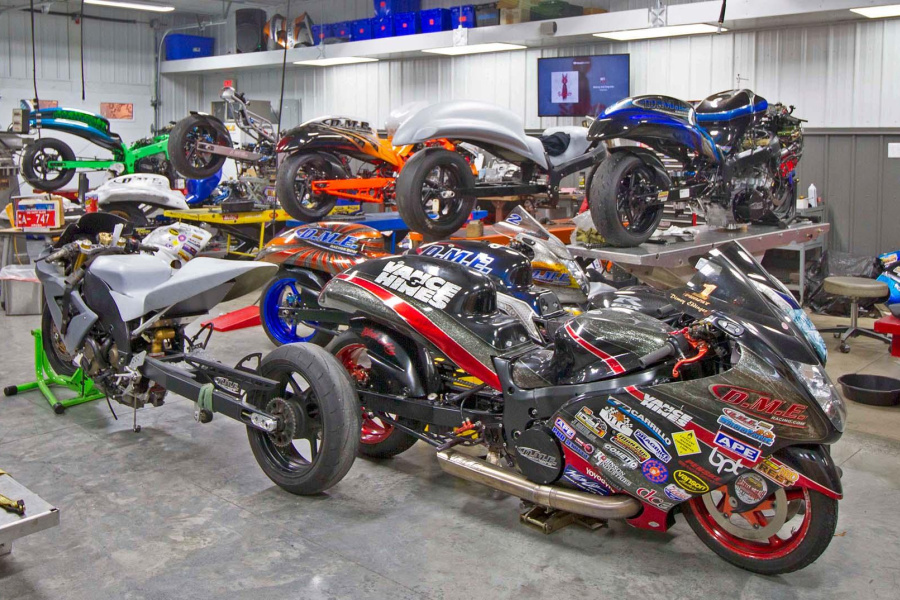 During race season the shop is always buzzing with performance-based tuning work.

Primarily motorcycle drag racing performance specialists, the company does make some car parts and straightens wheels for automotive dealerships. Eddinger and his business partner, Andy Sawyer, plan to expand the product and service offerings once the company is in its new, expanded facility.

Since machining and fabricating are the company’s bread and butter, DME Racing has invested in state-of-the-art equipment to produce the highest level of precision, and a lot of R&D goes into fabricating new parts. It tries to keep everything in-house to have control over the finished product. Sawyer is the programmer, and the company employs six full-time machinists and fabricators. DME Racing is always looking for additional fabricators and welders; anyone interested is invited to contact the company through their website.

DME Racing is recognized worldwide for its high-quality work and stays booked 6-8 months out. Eddinger said the work is steady since the racing season in Australia and Kuwait is opposite that of the US, and racers like to tune up their motorcycles during the off-season.

In addition to manufacturing parts, DME Racing sponsors two race teams, one that races up and down the East Coast and the other in the UK. They’ve built their teams’ bikes from the ground up, including the engines, with great record-breaking success. DME Racing is the home of the Quickest Pro Street Motorcycle in the World running at 6.34 seconds in the quarter-mile.

Eddinger no longer races full-time, but still spends a fair amount of time at the race track. He and Sawyer tune their team motorcycles and sell at all major race events, and don’t plan to slow down anytime soon. “This is something I’ve always enjoyed doing, so being able to do it for a living is gratifying,” Eddinger said with a smile. 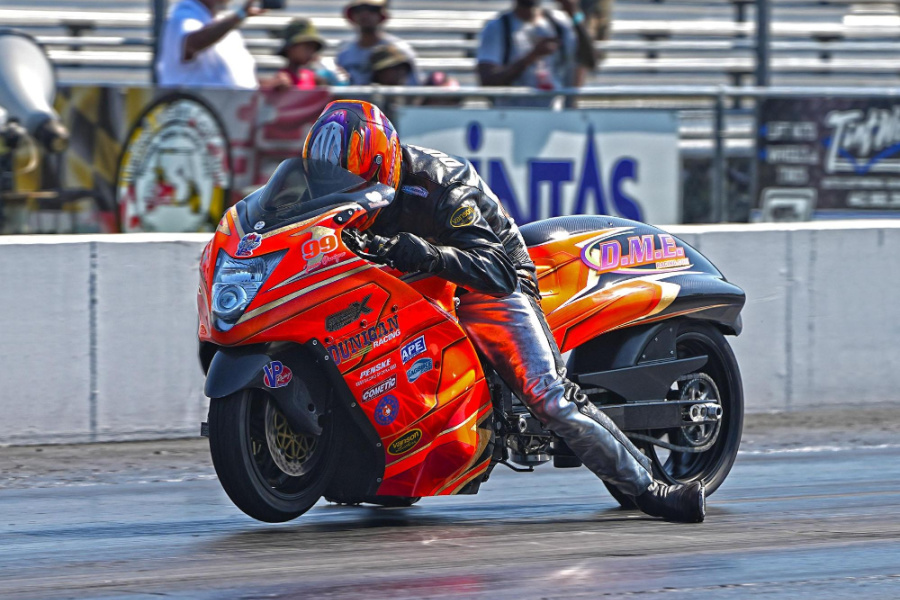