The world-renowned facility owned by Tommy and Judy Franklin, along with VP Tyler Crossnoe, welcomed the XDA for what was to be a record-smashing weekend. With 791 racers, it was the largest motorcycle drag racing event in Virginia. Record class turnouts also included an all-time high of forty-five entries in Vance & Hines 4.60. Orient Express Pro Street and DME Racing Real Street produced world record numbers for a weekend now known as the quickest in XDA history.

The Orient Express Pro Street class started dropping low ET’s in Friday’s test session with Chris Moore laying down a 6.43 and Jeremy Teasley a 6.38 sending the message that it would be a quick weekend of racing. 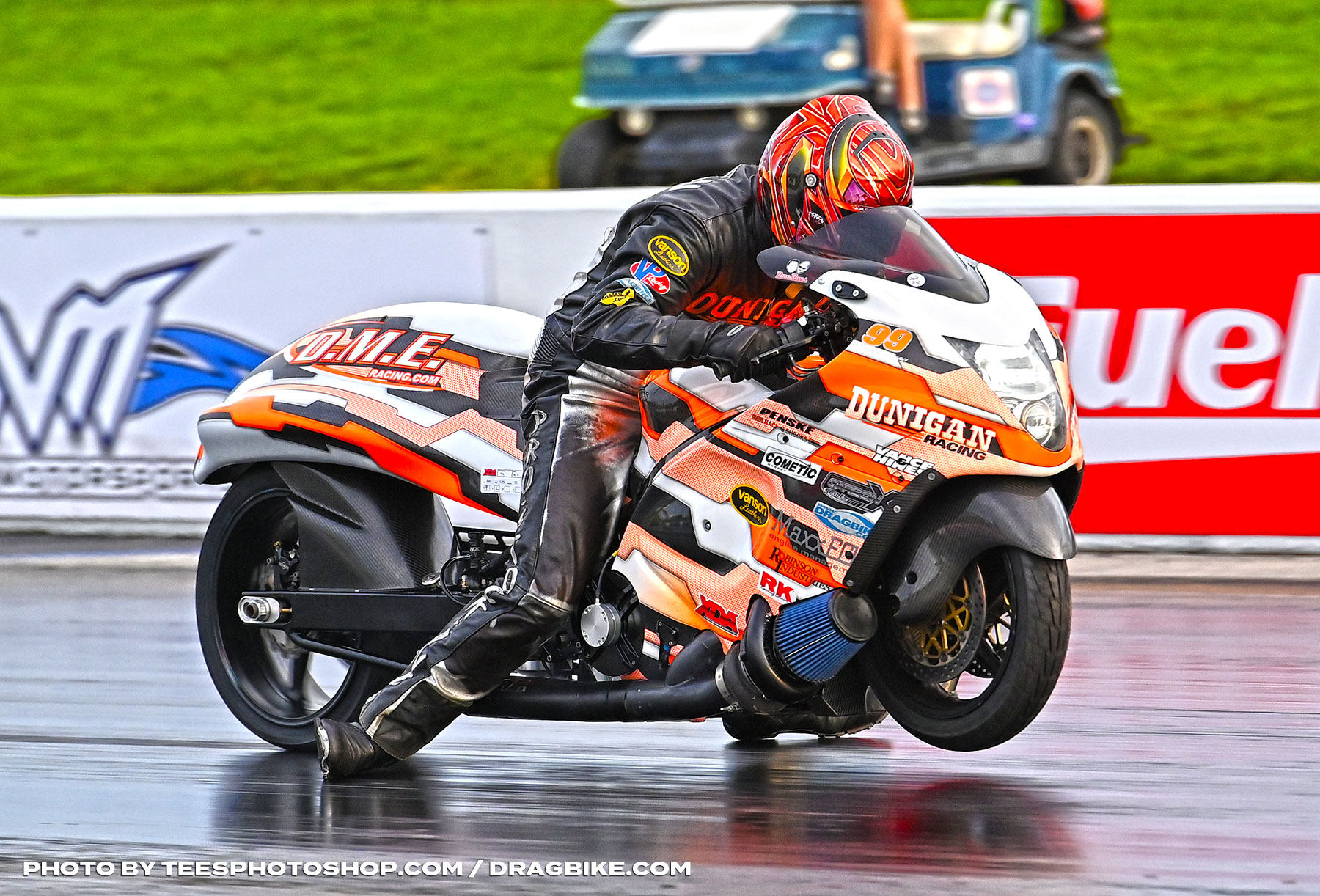 In the first round of qualifying on Friday night, all eyes were on the two liter bikes. Moore had issues leaving the starting line and aborted his pass. Jeremy Teasley on the Andy Sawyer/Steve Nichols tuned GSXR hauled ass off the starting line and threw a 6.346 on the board to break their 6.384 record. On his DME Racing Hayabusa, Jason Dunigan put a 6.65 on the board to make him the quickest turbo Hayabusa at the track and taking the #4 spot of qualifying for the weekend. Ricky Wood also ran his personal best in this round with a 6.78 at 217 mph. Wood will later improve on this ET during eliminations. 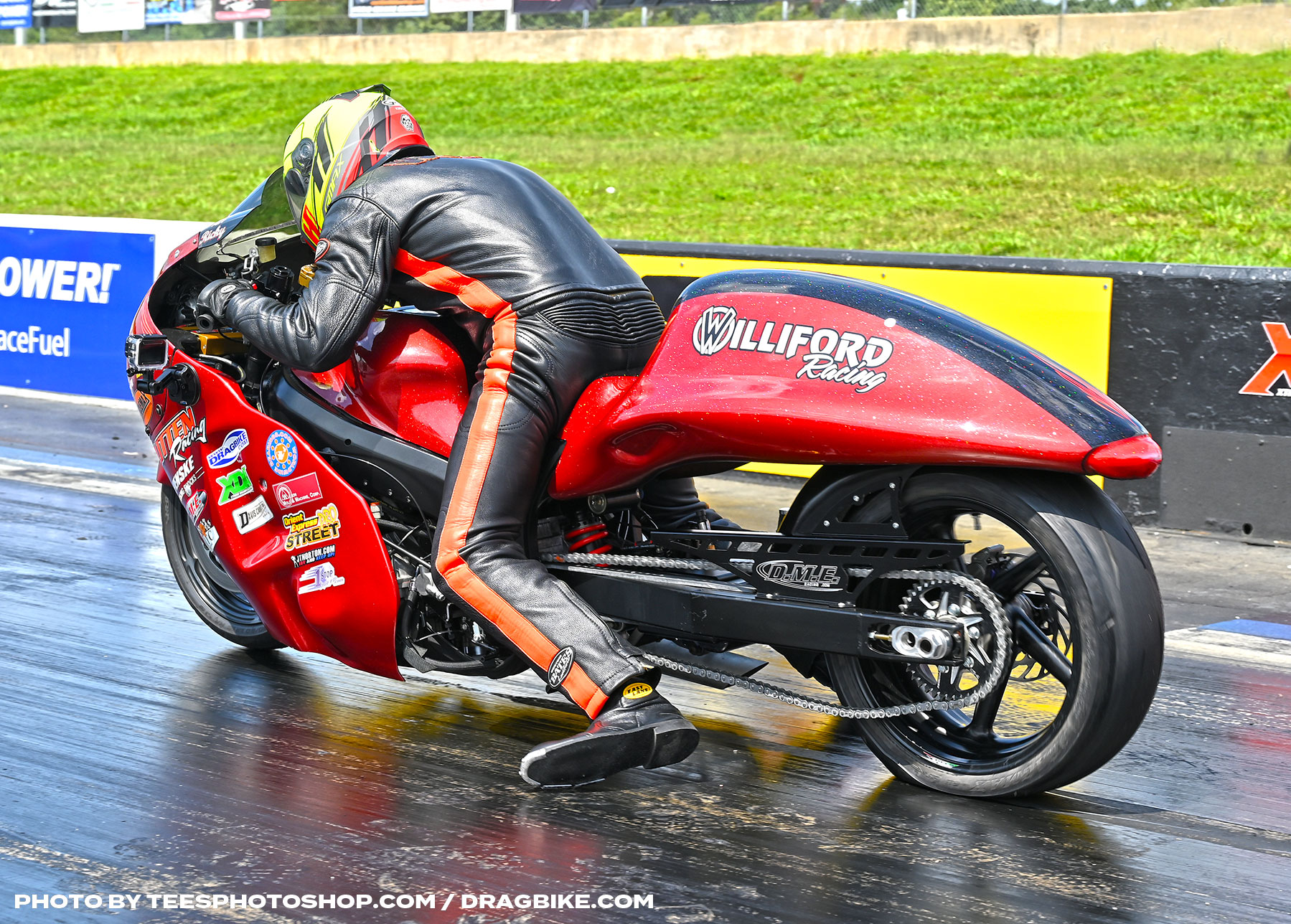 In round two of qualifying Teasley would need to run at least a 6.40 to back up the 6.346 to make it an official record. With rain overnight, the temperature and humidity of the day was elevated, and with a race surface that was struggling to completely dry out, it was questionable if we would see any big numbers in this round of qualifying. Despite less than ideal conditions, Teasley was able to back up his record with a 6.348 ET to keep his place as top dog in Pro Street. Richard Gadson showed up and entered the class on the DAS Supercharger Hayabusa, and with no shakedown runs, ran an impressive 6.69!

In the final qualifying session, Richard Gadson lowered that ET to a 6.570 to put him in the #3 qualifying spot. Chris Moore ran his best in qualifying at 6.424 to take the #2 spot in qualifying. Ryan Schnitz on the HTP GSXR entry would round out the top of qualifying in the #5 spot with a 6.68. 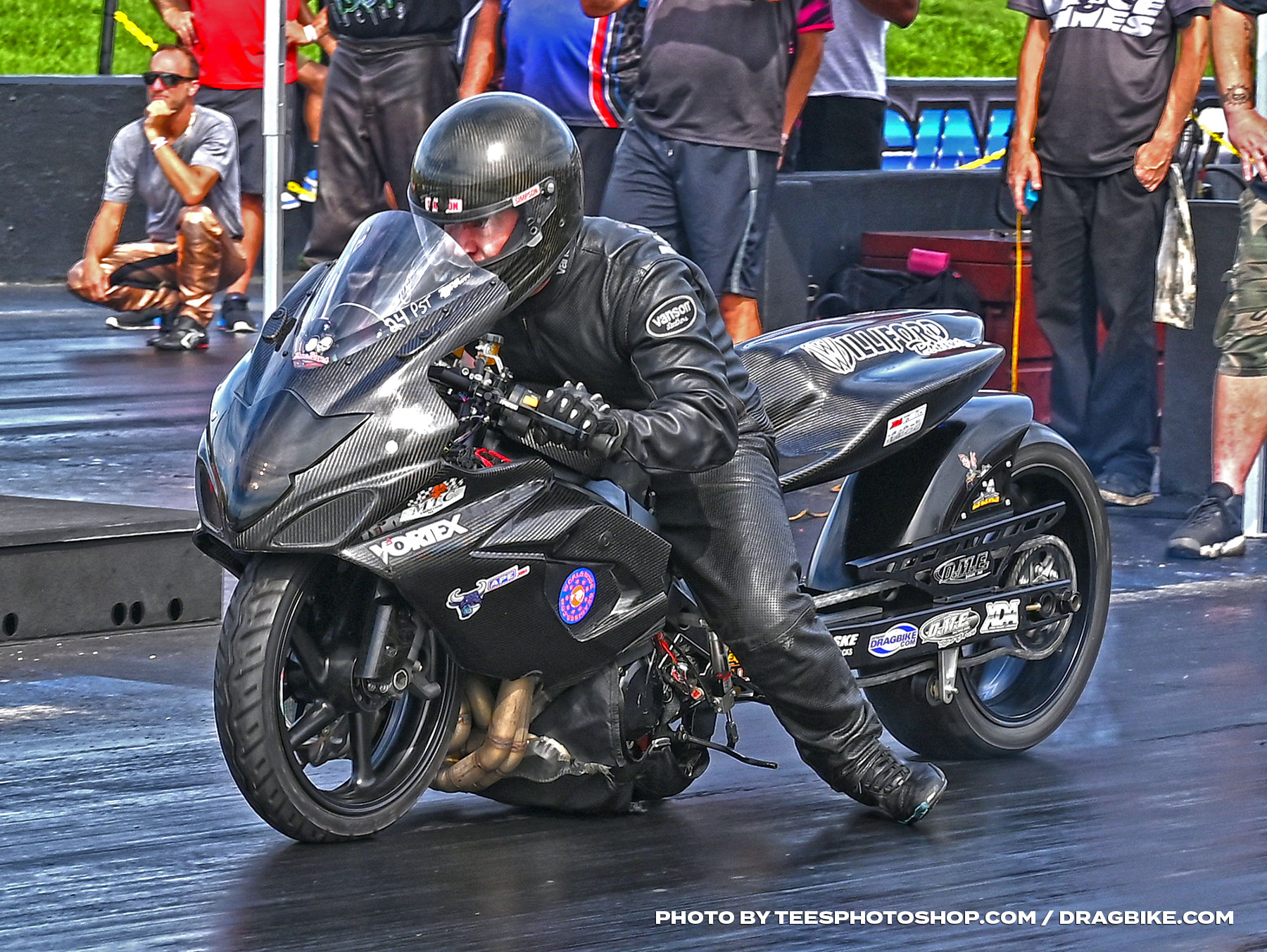 In round one of eliminations, Gabe Fredrick and Jordan Haase would not be able to make the call with hurt motorcycles sending Moore and Dunigan on to round two. Teasley ran a 6.489 but would be shown up this round with Rodney Williford running a 6.457 as a personal best on his GSX-R1000 entry. Ryan Schnitz and Richard Gadson would run 6.628 and 6.601 respectively to move onto round two. Shakir would drop too much power for the track to hold and send Rickey Wood to round two. And Darion Payne would take out Ehren Litten with a 6.855 to move on.

In round two, Teasley on his Pro Street bracket bike ran a 6.416 to take out Williford. Ryan Schnitz and Richard would run their best ET of the weekend at 6.563 and 6.522 respectively to move on. And Chris Moore would finally show his performance from testing with 6.380 to take out Ricky Wood who ran his personal best of 6.774. This pass would make the Moore Mafia bike the second bike to officially enter the 30’s! 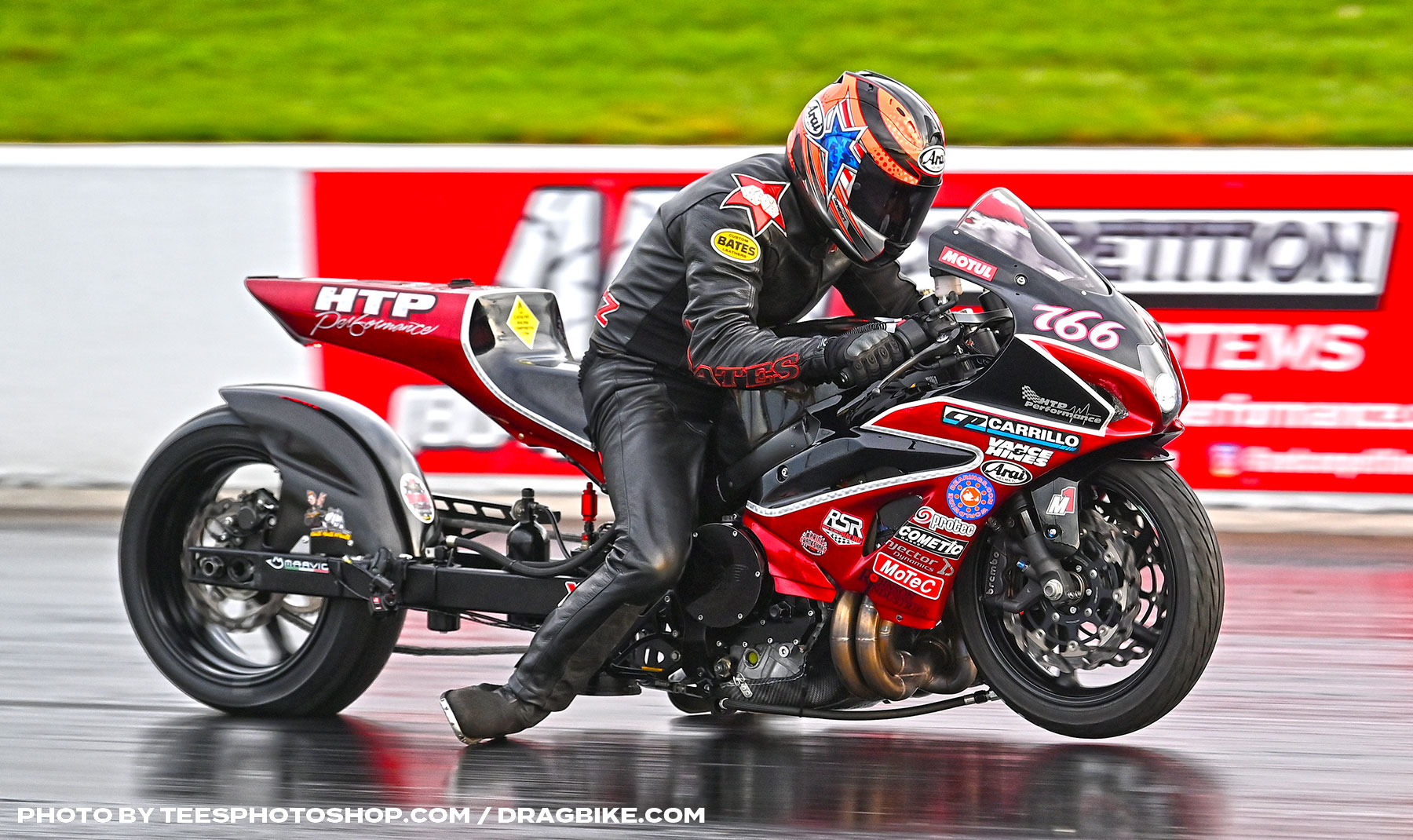 In the semi-final Schnitz and Gadson had no chance of advancing with both Teasley and Moore flexing. Teasley ran a 6.45 and Moore threw down a 6.36 to show he was there to stay. 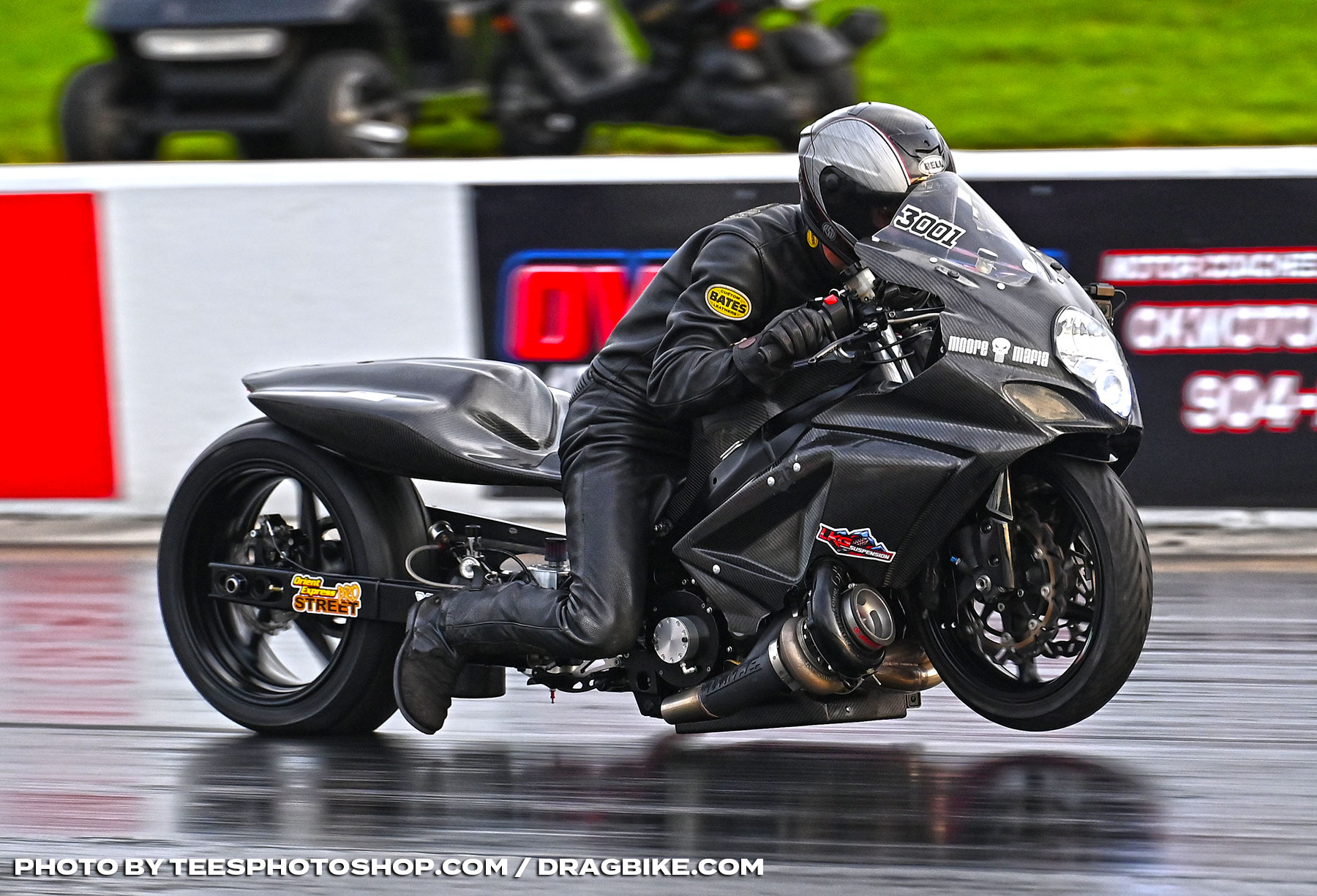 The final didn’t come until the sun was setting, and you could feel the tension in the air as these two titans sat on their bikes under the tunnel waiting for fresh track prep. A lot was at stake with Moore wanting to keep a wide gap on Teasley with his new points lead he gained after Greg Wallace took a first-round loss. And Teasley needed the win if you wanted a chance at the championship with only one race to go. 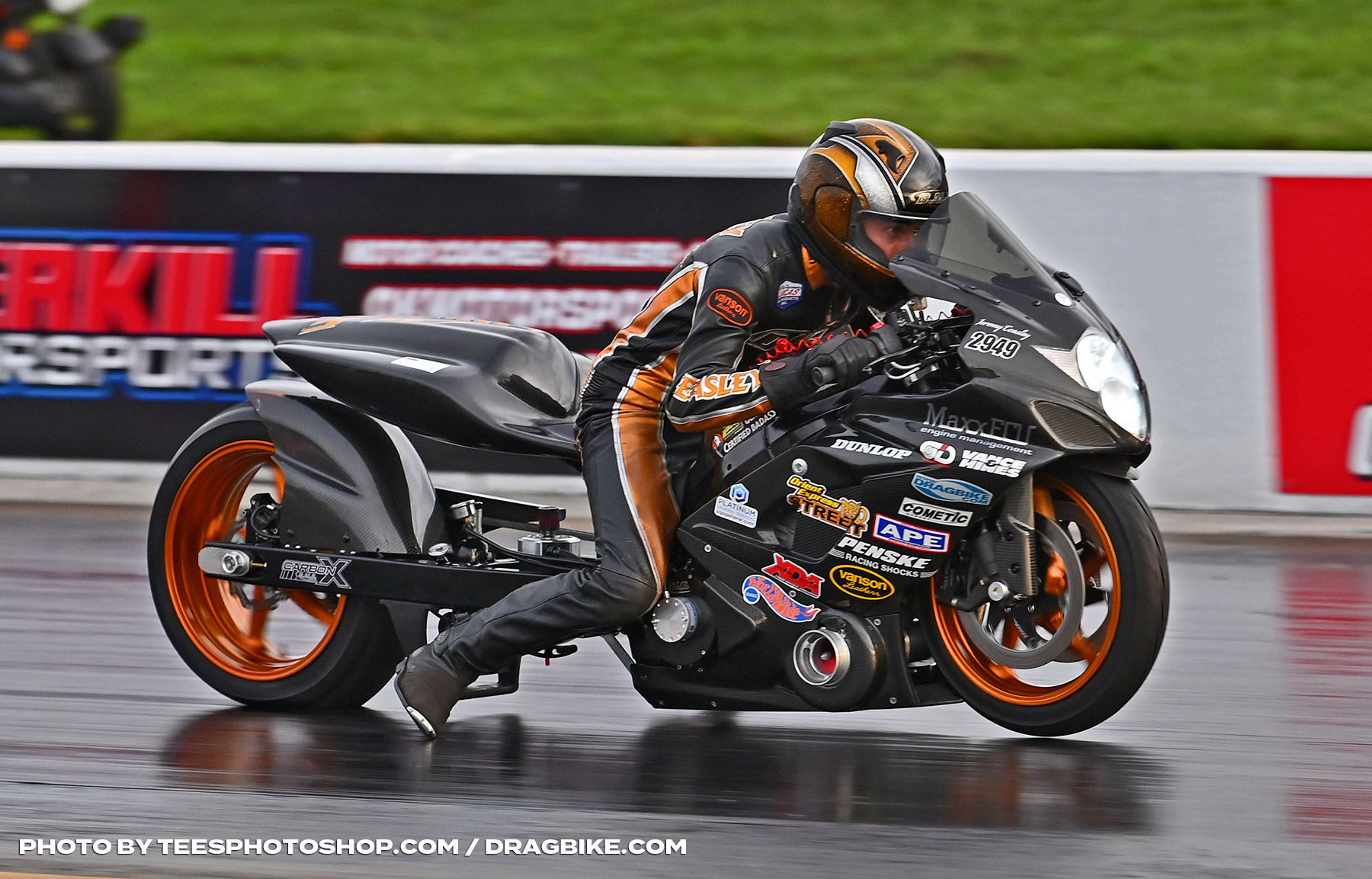 Teasley’s tuners loaded all their weapons into their MaxxECU with the mission to win at any means possible. Teasley was given the order to blow the motor and let the rods hang out if that’s what it would take to win. So Teasley rolled into the beams with the override button at the ready. When the bulbs dropped, Teasley left first, but when Moore unleashed his power, the track couldn’t hold it, and he spun off the line as Teasley sailed down the track to win with a 6.502 and a motor still intact! 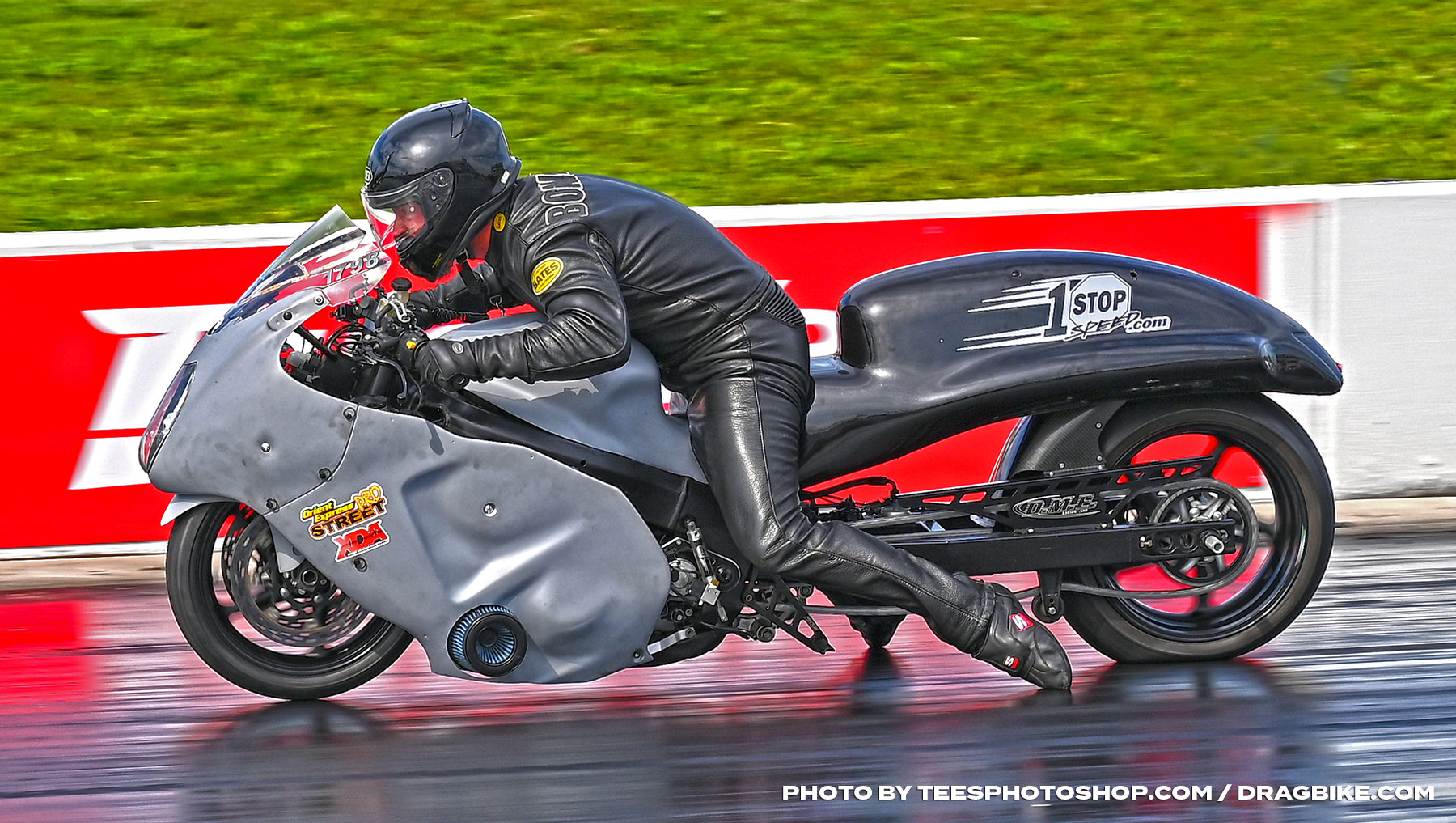 With three riders not qualifying into the sixteen-bike field, XDA allowed them to race in the Pro Street B class to get competition runs in. Kenny Brewer and Ryan Bonitatis faced each other in the final to both run their first six-second passes. Brewer took the win on a holeshot running 6.909 to Bonitatis’ 6.888. With these two passes, we now have a total of fifty riders in the six-second zone.