The DME Racing shop started 2019 season on overtime, and the workload hasn’t let up. In 2017 when Dimey Eddinger started advertising his headers and exhaust systems, he had not anticipated the market demand as orders rolled in throughout 2018. “At one point we stopped promoting our headers so we wouldn’t get behind on orders,” stated Eddinger. “We don’t like to make our customers wait for products. As a bike builder and racer, I know the importance of getting parts in quickly to finish builds.” 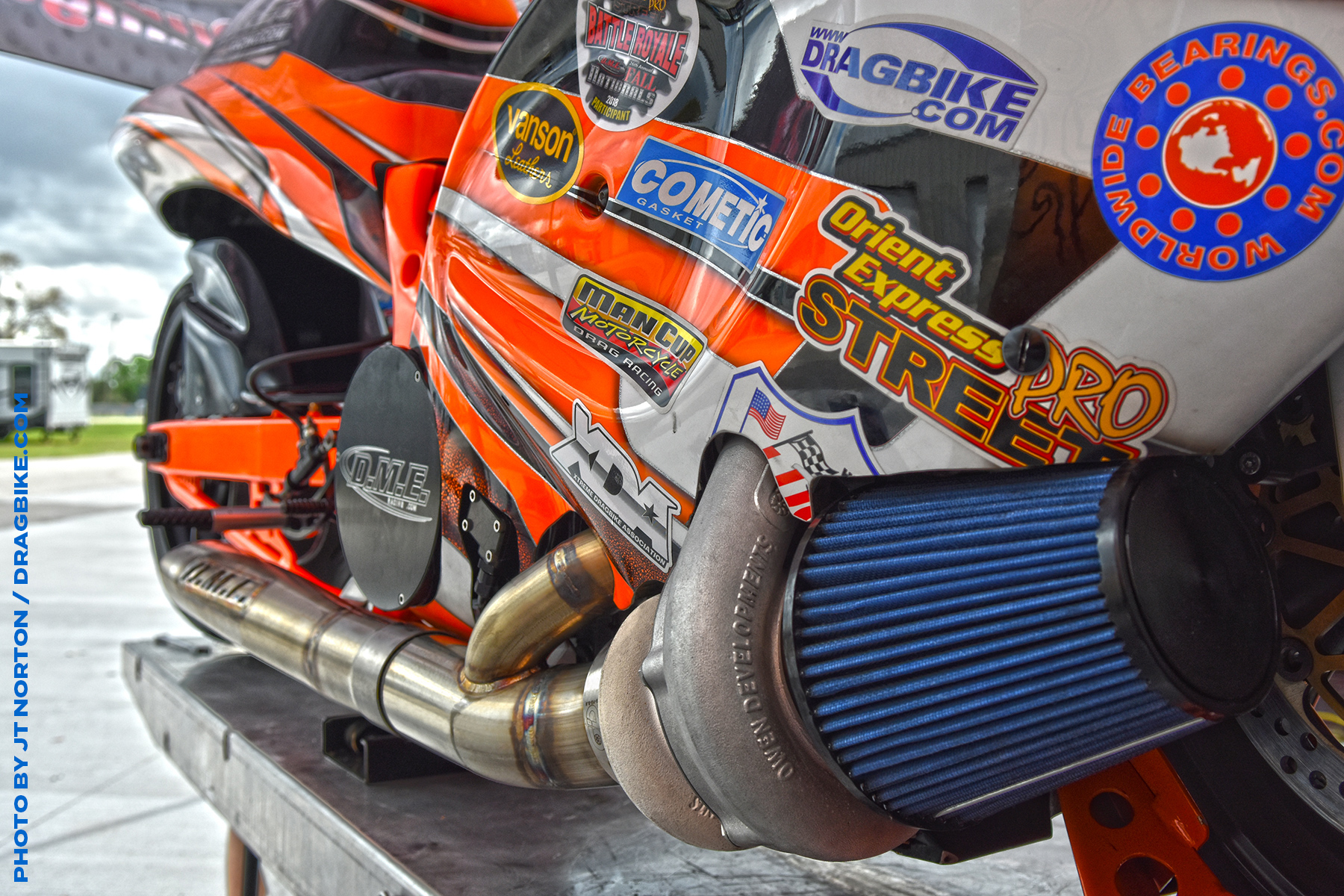 At the end of 2018 Race season, Jason Dunigan told Eddinger he wanted a turbo sidemount system on his Pro Street bike. And when Dungan wants something, there is no talking him out of it. Team tuner Andy Sawyer and Eddinger got to work on the new DME Racing SideMount after the Man Cup World Finals, and by the end of 2018, they had a completed prototype ready for testing. By February they had the new header and Owen GBT-69 Turbo installed, and the team was off to Orlando for testing.

For the February test session, they also debuted Chris Connelly’s GSXR-1000 Pro Street bike that they quietly built during the 2018 race season. With the Gold bike now parked in the corner, Jeremy Teasley hopped on the GSX-R1000 to see what she could. “I have ridden a lot of bikes, and I pride myself in being to handle whatever comes at me, but this one, I thought she was going to throw me off the first time down the track,” said team rider Jeremy Teasley. But with the maiden voyage out of the way, Teasley quickly tamed this beast and was producing numbers that would make Frankie Stotz cry. 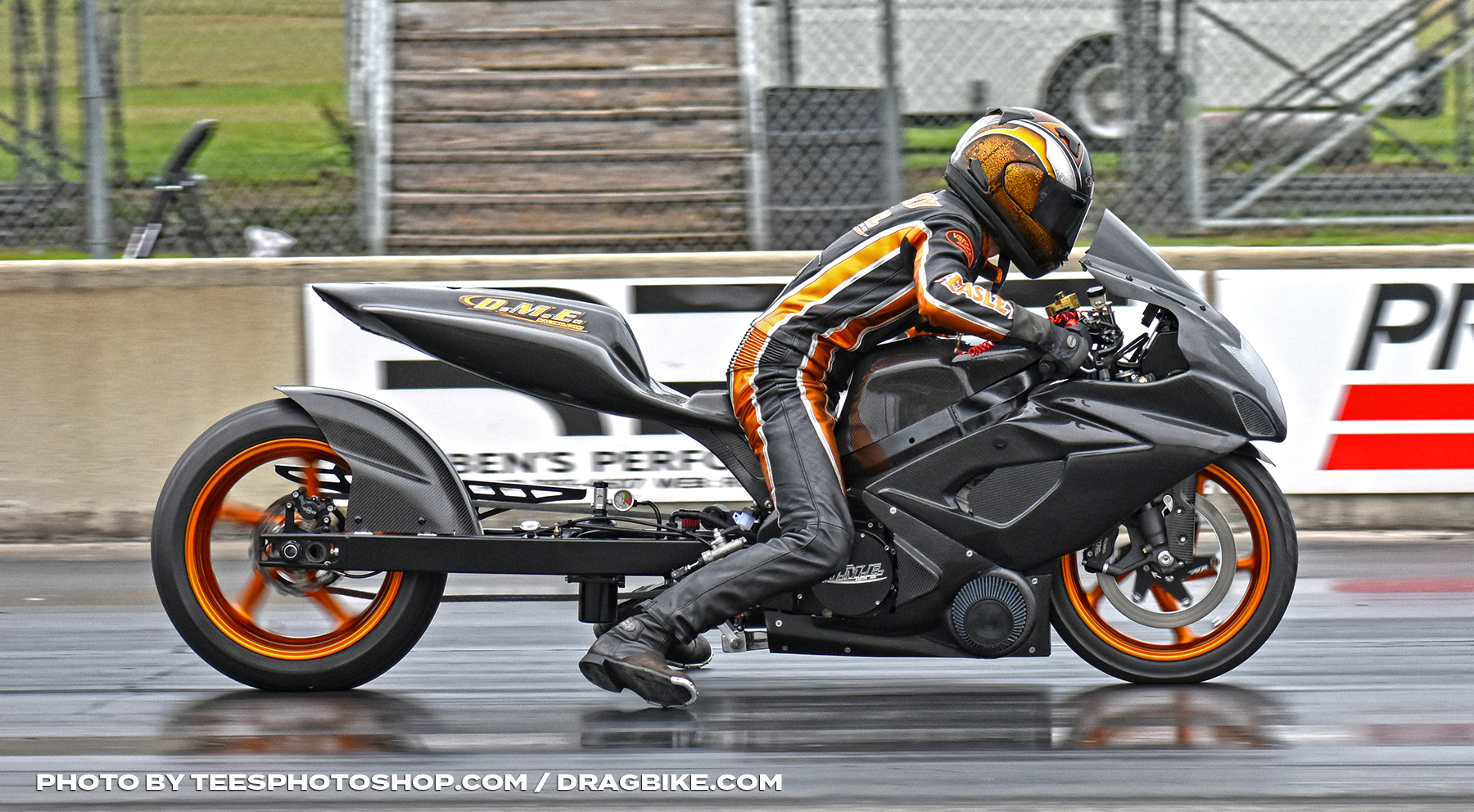 Chris Connelly Jr. plans to stay on his same bike for 2019 as his bond is strong with ‘Turbo’ and his riding continues to improve every race. His testing yielded his fastest times, and his riding was consistent, which will be his proven strategy for 2019.

The team was excited and nervous to put Dunigan’s new SideMount to the test. “With any new products or changes to a bike, I am prepared for issues when we get to the track,” said team Tuner Andy Sawyer. “But we put an extraordinary amount of time into this new set-up, and we wanted to see results not just for us, but for the Duinigans.”

Fortunately for Sawyer he didn’t have much to worry about as the new system delivered the fastest run Dunigan had made to date with a 6.68 at 217mph. With success in testing Eddinger and Sawyer high tailed it back to the shop to get back to work that was stacking up while there were gone. 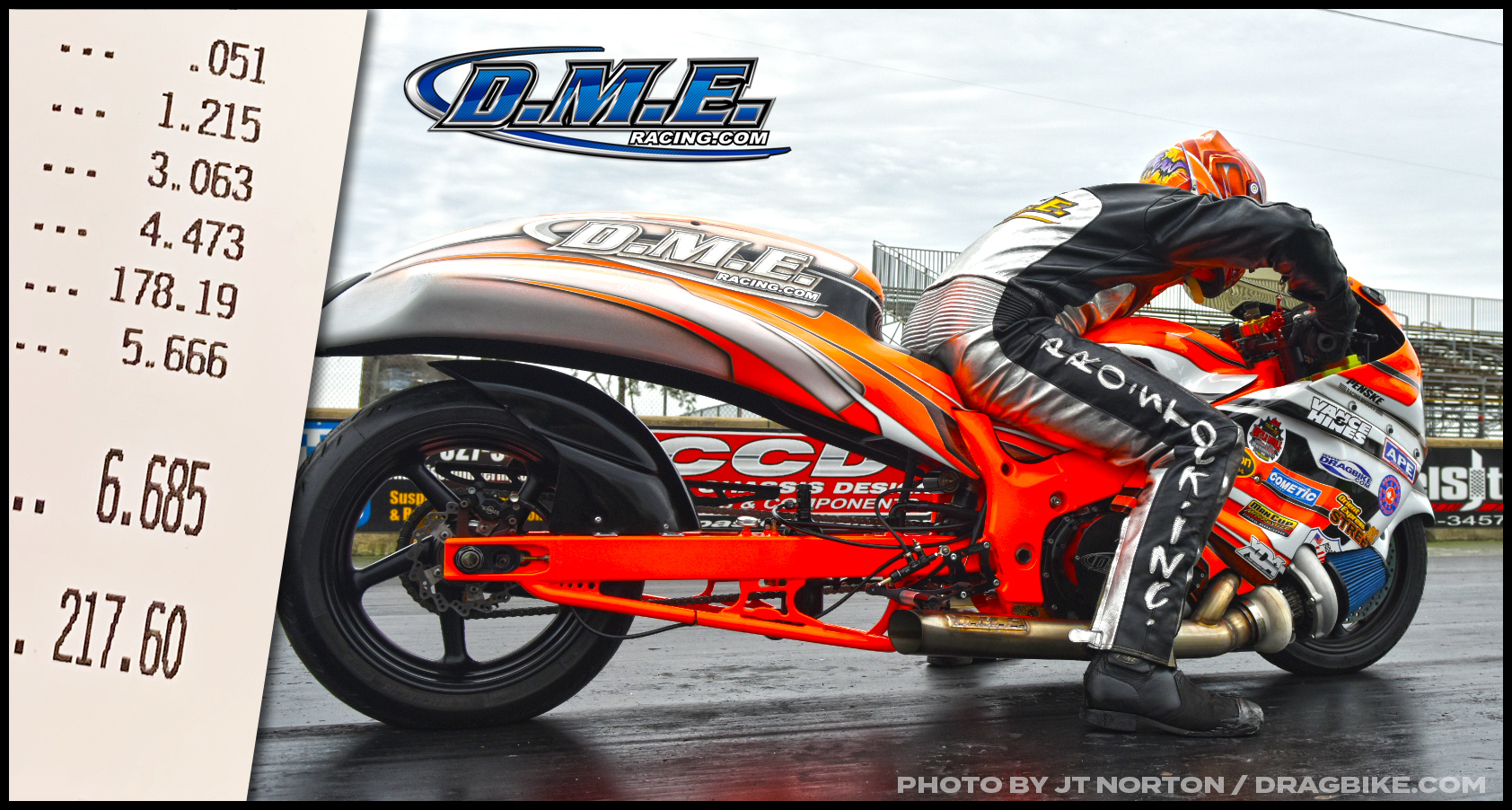 At the end of 2018 PDRA decided to ban turbos from their Pro Extreme class. And yes this was after Terry Schweigert entered the class on the DME Racing built Turbo/Header System tuned by Dan Wagner ran a 3.91. Ehren Litten on his newly built turbo also ran a 3.99. Those nitrous guys wanted no part of the turbo competition.

This decision opened a door which XDA decided to capitalize with their new Pro Extreme class that DME Racing is a presenting sponsor. XDA’s Pro Xtreme is an 1/8 mile heads-up class is modeled on Pro Mod featuring Turbocharged, Supercharged, and/or Nitrous Injected dragbikes on gasoline or methanol, along with Injected Nitro Methane bikes. 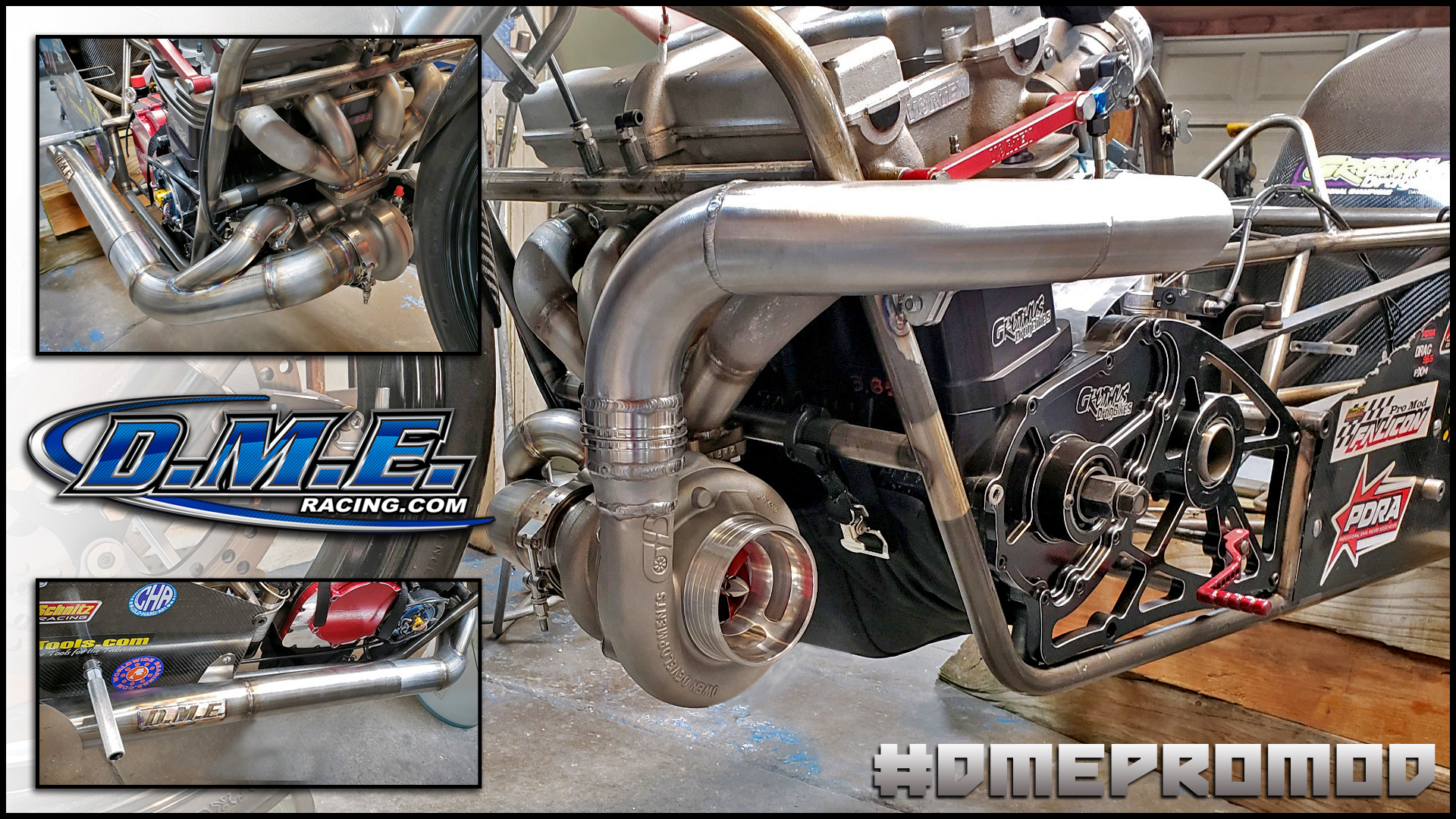 With our success on Schweigert’s bike and another turbo class on the schedule, orders for the DME Turbo/Header System rolled in. And even though this is all happening in a short period, they got the jobs done and now have five completed bikes that are now track proven.

After successful testing in Orlando the team showed up SGMP ready to lay down some numbers with their new SideMount system. But instead, Dungian’s bike decided to disrupt the harmony under the tent as it struggled to break in a new Michelin tire, which is technically a ten year old tire not in production anymore.

Teasley on the GSXR qualified number one with a 6.649 at 219.40. But his weekend would be ended early in round two by teammate Chris Connelly. Connelly who is hands down is the most consistent racer on the team was unstoppable taking the win and running a 6.795 giving him the points lead in Man Cup Pro Street. 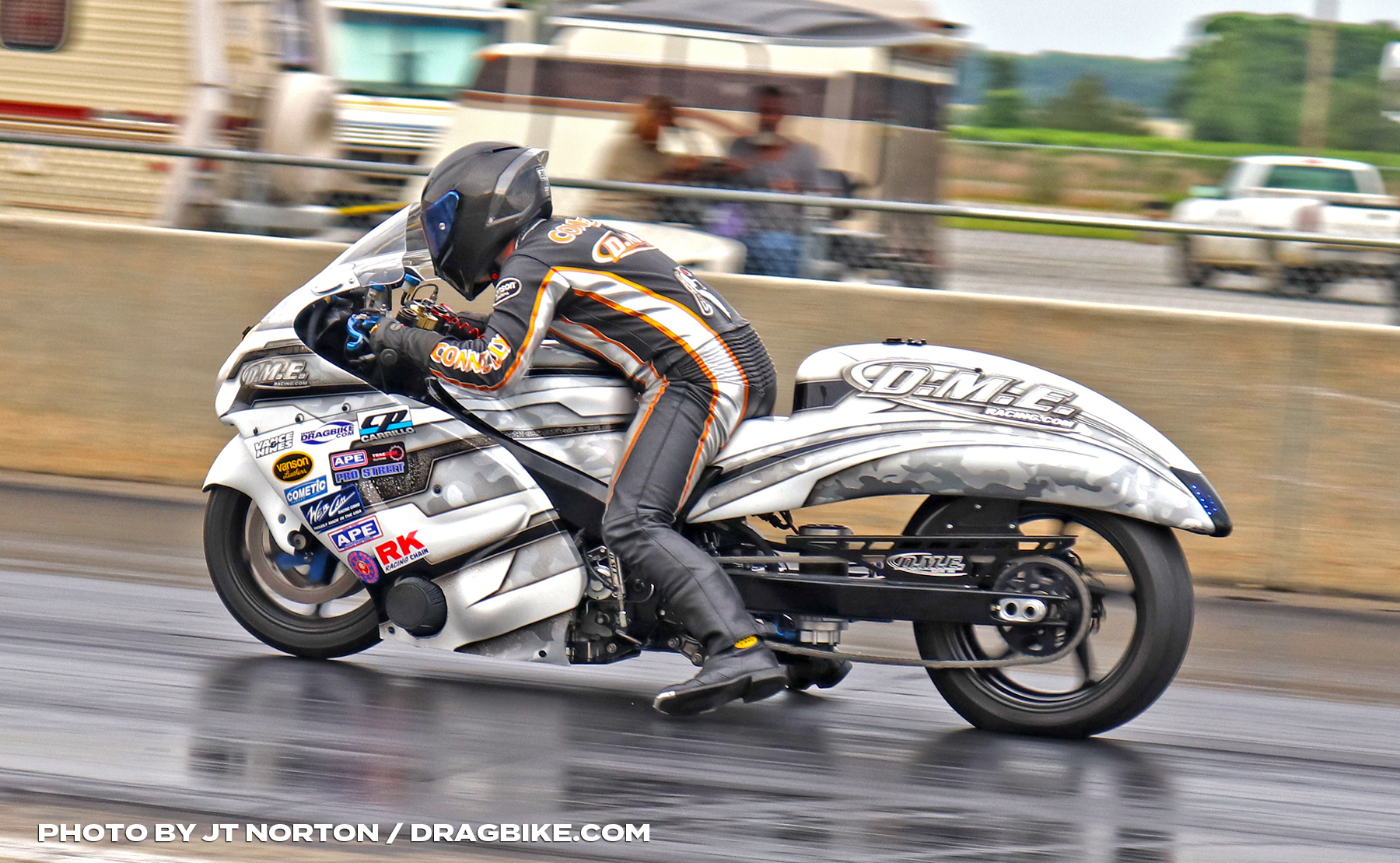 Jean Gosselin entered Pro Open with his newly built DME Turbo/Header System and quickly set the record and earned the #1 qualifying position with a 6.48 at 206 mph. Jean Gosselin then went on to win the event and take the points lead to start his season.

The team then headed to the XDA Season Opener with Dungian’s bike ready for battle and looking to get the GSXR in the records books. But first, they were on a mission to find a solution to the tire issue the pro classes are facing. Eddinger spoke with Eddie Krawiec at Vance & Hines, and he set them up with Dunlop to do some testing. Dunlop’s Business Development Manager, Chad Geer showed up on Thursday with a van full of tires for DME and HTP to test. DME brought Connelly’s Gold Pro Street bike to do the testing to not disrupt event testing. 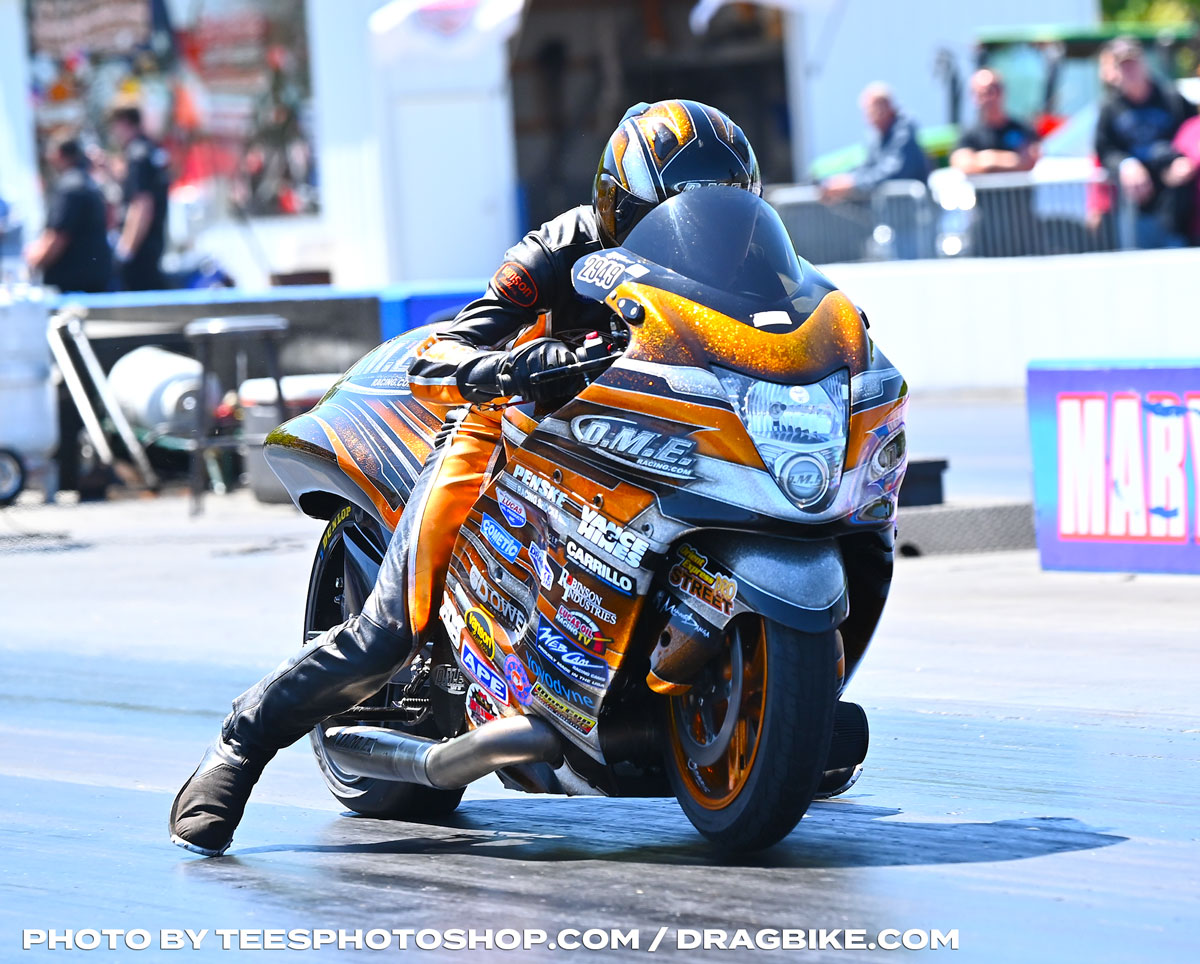 First, pass out the Dunlop Sportmax Q4 produced an impressive 6.88. Eddinger and Sawyer were pleased with this performance, and so were the other teams who were ready to throw their money at the Dunlop rep to get their hands on one. They made another pass, this time running a 6.68, again on a bike that had been sitting for months untouched! This tire is officially ‘DME APPROVED.’

This event was a complete turn around for Dunigan from Man Cup. With his bike back on track he qualified with a 6.648 at 220.73 mph. This personal best ET also sent him to the #6 spot on the Pro Street GOAT List and the top ten list for MPH making him the quickest 200lb Pro Street rider. 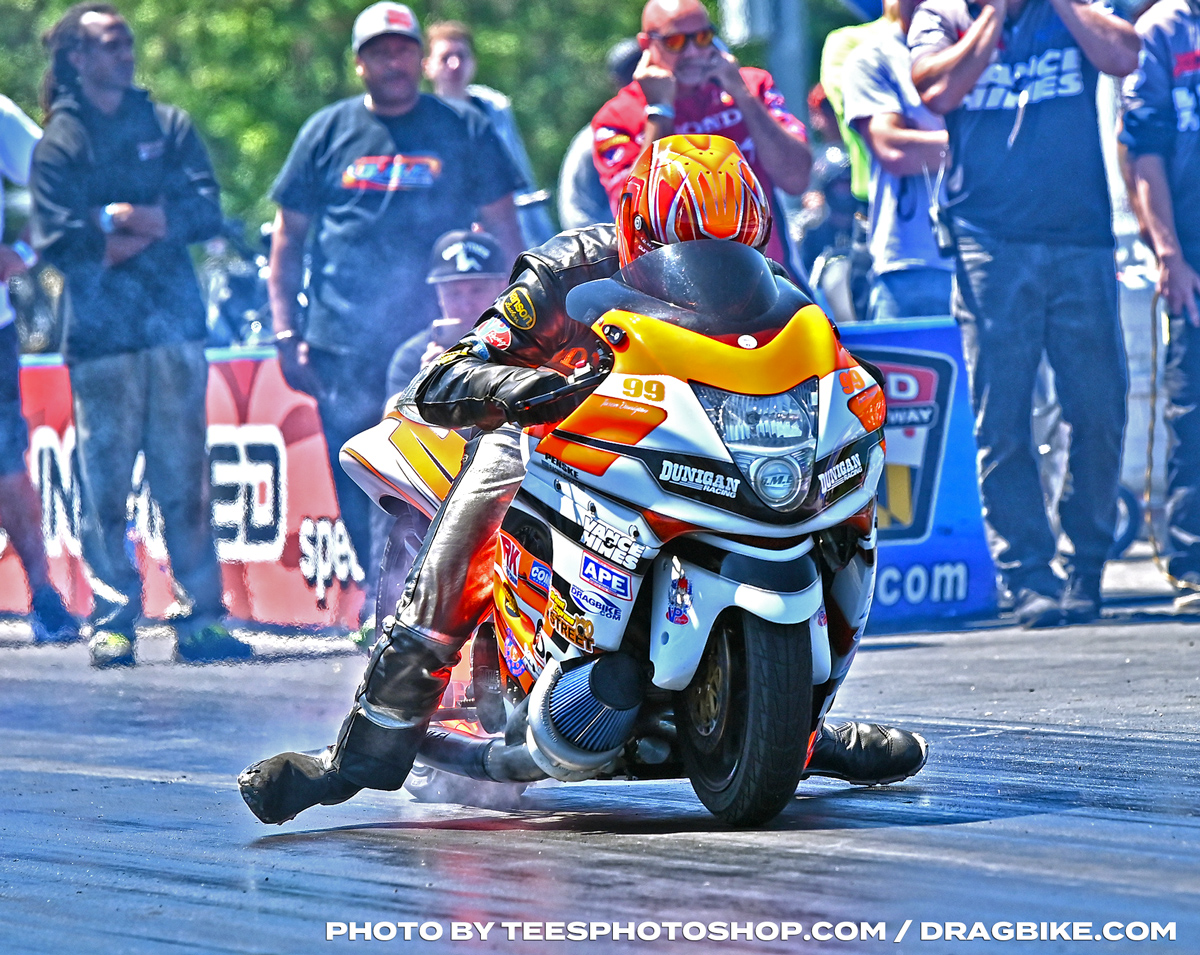 During qualifying, he competed in the Penske Racing Pro Street Shootout taking out Chris Moore and Ehren Litten to race Rodney Williford in the final. Rodney just made a 6.57 pass the round before, so Dunigan made sure he got the starting line advantage with a better reaction time. But Dunigan’s 6.675 would be no match for Williford’s 6.572, and he’d have to settle for runner-up.

The heavy hitters in Pro Street were all trying to be the first rider to run a 6.50 pass officially, and Connelly’s GSX-R1000 was a contender with Teasley riding. During Friday testing Teasley and Williford but the first side-by-side 6.50 pass on the board. Teasley ran a 6.52 at 214 mph, and Williford a 6.55 at 226mph. But it wasn’t official. On Saturday while everyone was competing for the first fifty, Andy Sawyer was putting a tune in the bike that would skip the fifties, all Teasley had to do was keep the beast tame for 1320 feet. And on a day that was experiencing crosswind conditions, it would be a task. 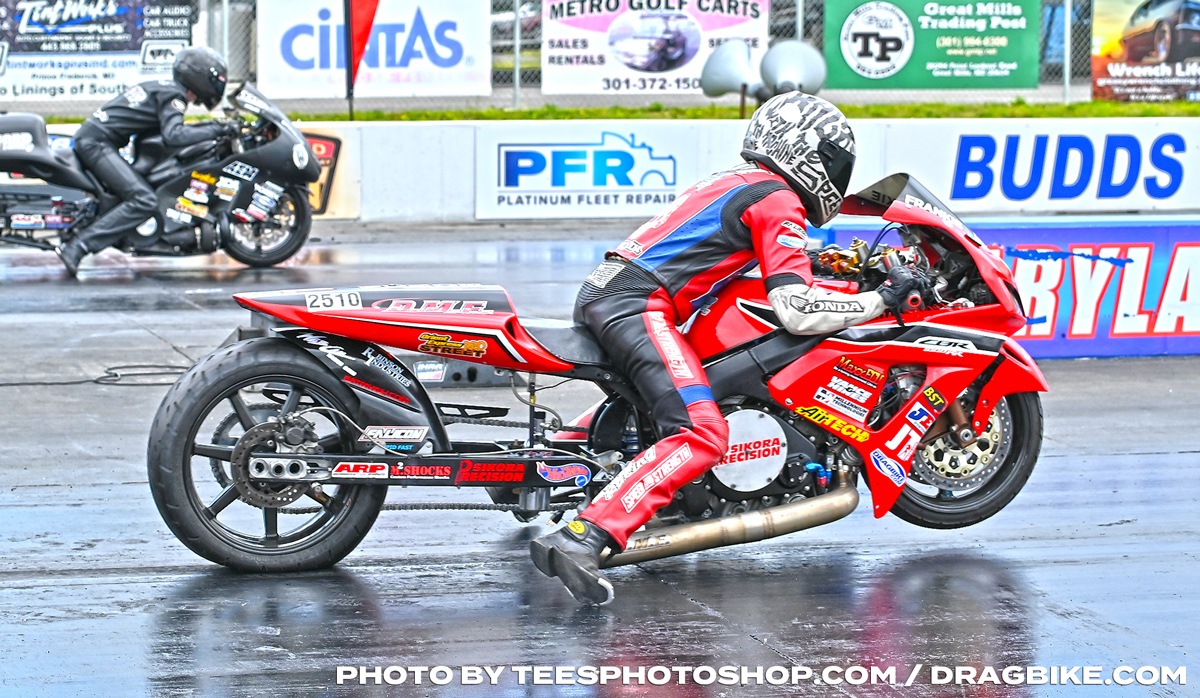 One the first attempt Teasley had to abort the pass to avoid the wall. Frankie Stotz was up a few minutes later on his Honda equipped with a DME Turbo/Header System and swingarm. He left the tree like a bullet, the front wheel stayed down, the bike went straight, and the scoreboards flashed a 6.581 at 204 mph making him the first racer to officially enter the 6.50’s!

The 6.50’s celebration would be short lived when round two of qualifying came around. Teasley was determined to put Sawyer’s tune down the track and bypass all the fifty nonsense. And he did just that with a 6.492 at 193.79 while lifting to avoid hitting the cones! Everyone at the starting line went wild! We now have the quickest Pro Street bike in history.  Did we mention he was lifting?

Despite having the quickest bike on the property, Teasley, Connelly, and Dunigan would all fall in rounds one and two of competition of Pro Street. 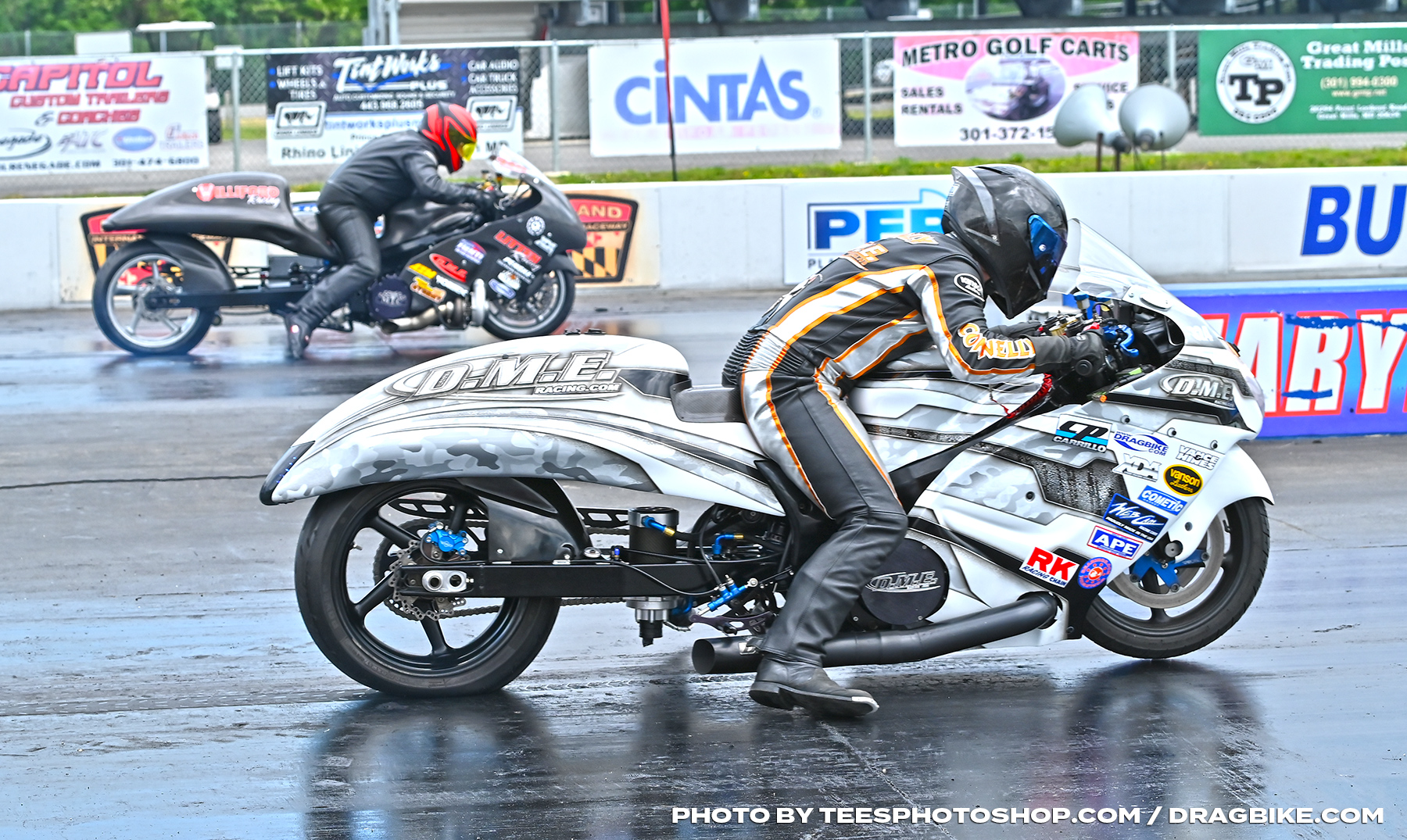 Over in the new Pro Extreme class presented by DME Racing, there were three bikes in competition outfitted with the DME Turbo/Header System. Rob Garcia, John Collins, and Kevin Clark were racing for the first time this year under the watchful of Tuner Dan Wagner. 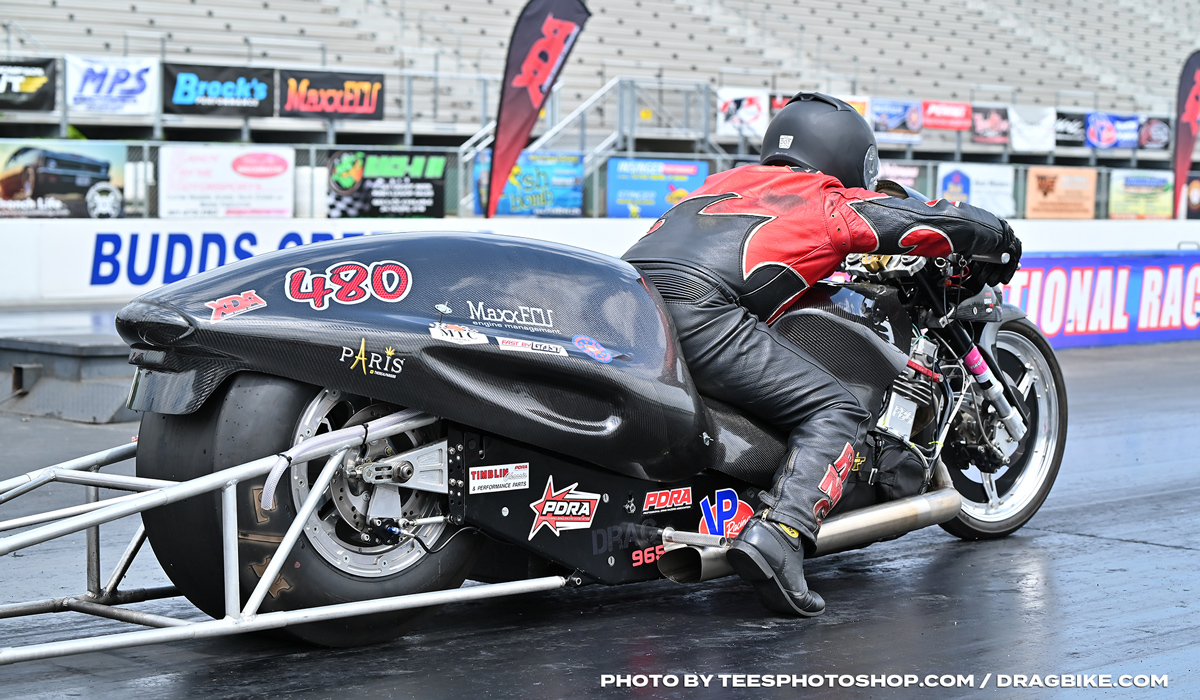 All three riders made it to the semi-finals, but it would be Kevin Clarke and Rob Gacia to face off in the finals at a chance for the first win of the season. And with a .0195 margin of victory, Clarke took the first win of the season with a .052 light running a 3.974 to Garcia’s .070 light and 3.975 ET. Clarke carried the front wheel from the tree through the finish line, showing how much power is in that bike.

And now for the big news, Terence Angela is back!!! Angela who has been on a hiatus building his new house in Aruba will return to racing action for the XDA MTC Summer Nationals at Virginia Motorsports Park on May 31- June 2. Come out and see us! 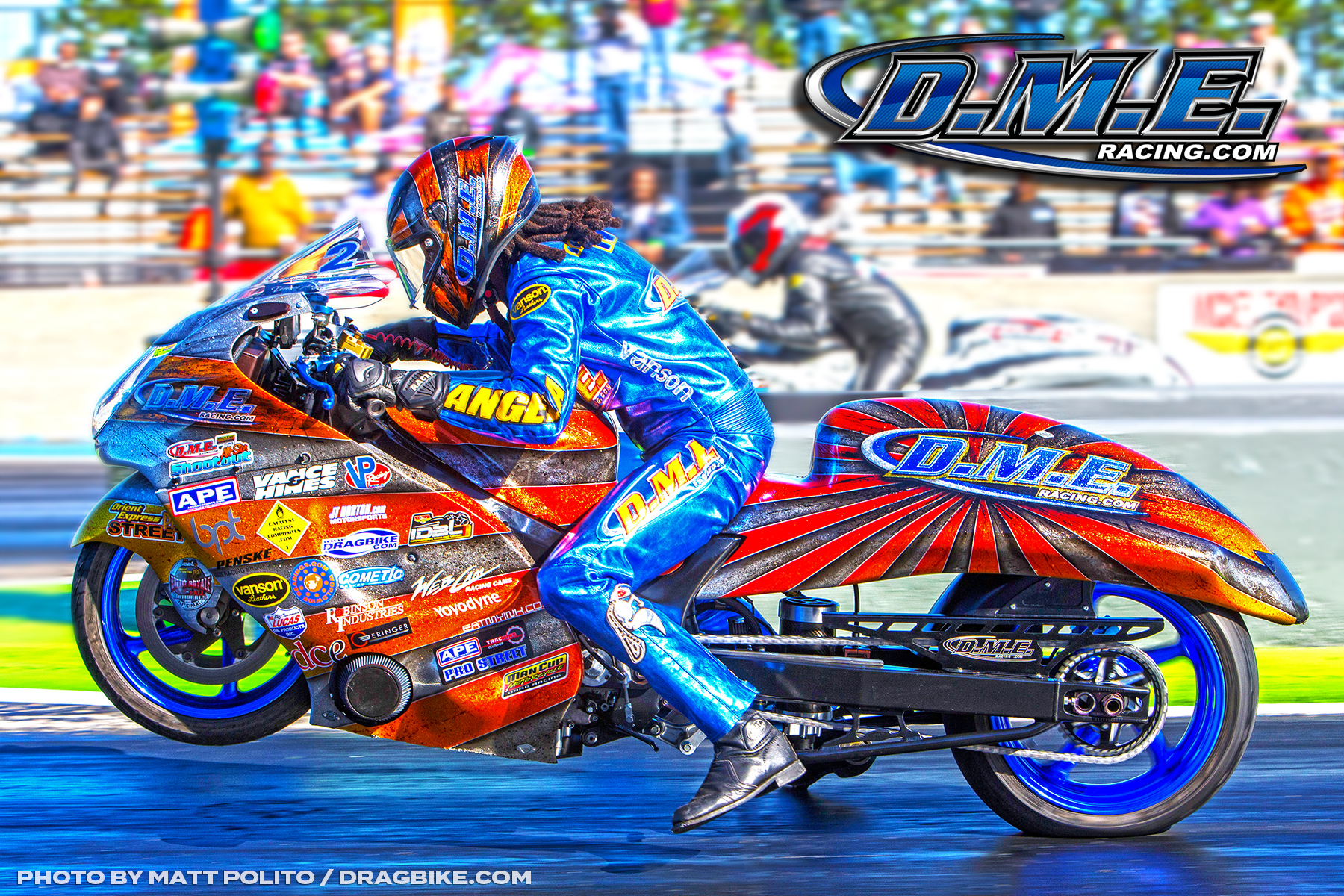 2019 Wins this year by DME Racing equipped bikes are:

Kings of Grudge – The Jump Off 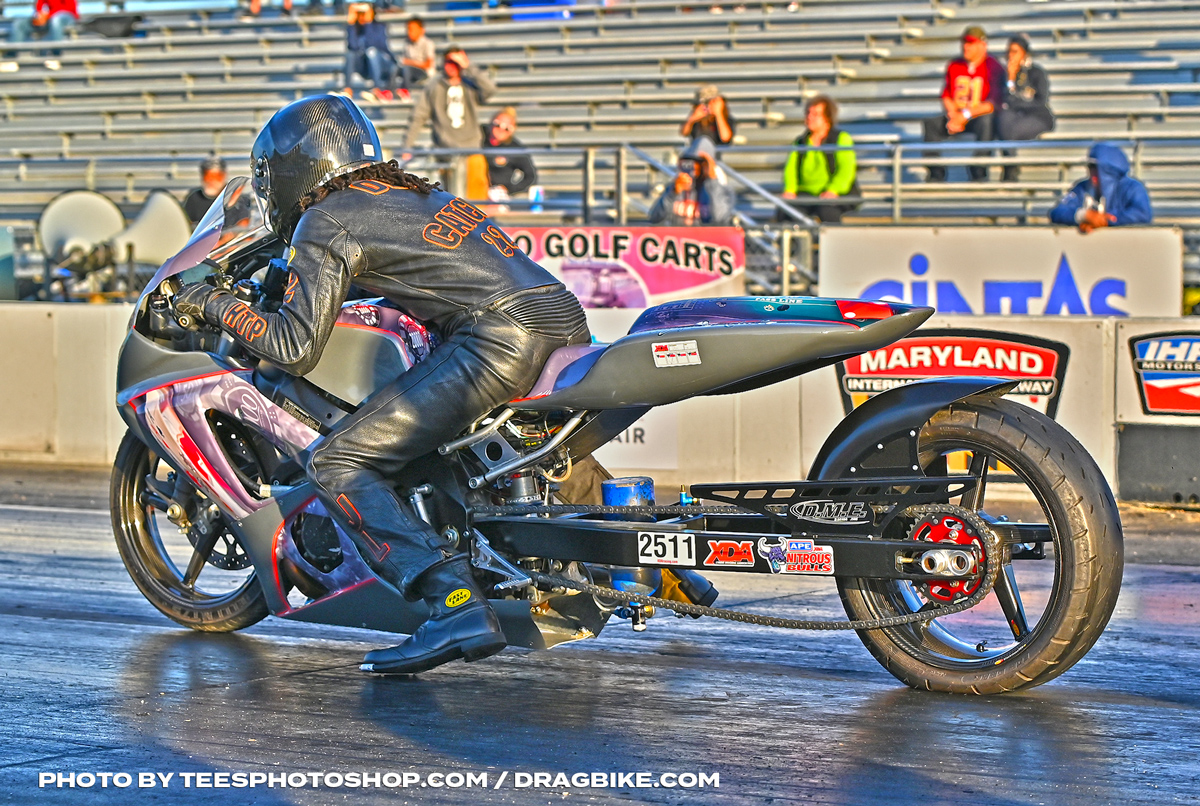 Thanks to our Sponsors for their Continued Support